National People’s Party (NPP) chief Conrad K Sangma is on his last leg of campaign and is covering different constituencies to drum up support for NPP candidates. 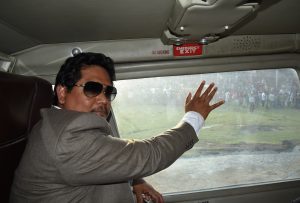 A tight schedule for Conrad on Wednesday began from 10 am as he covered five massive rallies at Songsak, Kharkutta, Phulbari, Tikrikilla, Rajabala and Selsella constituencies seeking people’s mandate for the February 27 elections.

He takes out time to speak about the election and why this election is important to NPP in absence of late Purno Agitok Sangma.

Talking to NorthEast Now on board a chartered chopper, Conrad Sangma says NPP would have been in a better position had his father Purno A Sangma, the lone Lok Sabha Speaker from a north-eastern state till date been alive today.

An MP of Tura Lok Sabha he said, “If he (Purno Sangma) had been there things would have been far better I feel. Simply because of his personality, larger than life image, the kind of reach he had would have been a completely different situation. But nonetheless even though he is not there the fact that he was such a personality, people still remember him and still relate to him and I think the impact of his work and his past still remains with us and we get positive results because of that.” 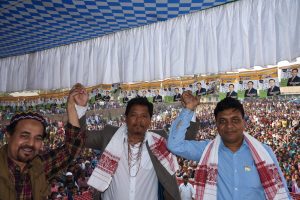 Conrad intensified his campaign from Tuesday stressing that the main focus of his party after coming to power is infrastructure development, tourism and the social indicators like heath, education, woman empowerment etc.

“We have not been able to tap on the potential that we have in the sector of tourism. We are going to make sure that right policies are adopted to ensure that tourism creates large number of jobs especially through entrepreneurship development. Secondly, we are blessed with lots of agricultural products but we have not been able to add value to those products. Food processing and packaging is going to be one of the sectors we would like to focus on. Another aspect is that we share a 420 plus km of border with Bangladesh and the long border is clearly an opportunity which our state governments in the past without a policy could not take advantage of. We want to ensure that we can take advantage of that as well.”

At present NPP is contesting in 53 seats out of the 60 member Meghalaya Assembly. Replying to a question as to why the voters seek a change this time Conrad said, “Lack of development and unemployment has made the people to look forward for a change. The leadership of Congress has brought a lot of resentment within the party itself. That has led the Congress to disintegrate to a large extent. As a party NPP has been able to present itself as an alternative to the Congress at the state level. There was a time when NPP was only considered to be strong in Garo Hills, but now other constituencies have also accepted NPP.”

The National People’s Party is an ally of the North East Democratic Alliance (NEDA) although the NPP and the BJP is fighting the polls separately.

Conrad while refuting Rahul Gandhi’s remark of NPP being a B-Team of BJP denied any alignment with the BJP.

“Alignment at the state level elections is different and being a part of NEDA is also different. If you talk about NPF, it is also a part of NEDA but it didn’t have any pre-poll alliance with BJP. Even in Manipur when we contested we contested on our own. We like to maintain our own identity and based on that we will win our political battle.

However, Conrad has time and again indicated that a post poll alliance is very much on the cards.

“As far as post poll is concerned, we will see how things come out. That will depend on the election results. We have an understanding that we will work together. Having said that we are a regional party geographically but we are very much nationally oriented.”

The National People’s Party is yet to name its chief ministerial candidate for the elections.

Conrad, however being the most prominent face of NPP along with his sister Agatha Sangma, the youngest Union Minister in the UPA government are the most probable candidates. 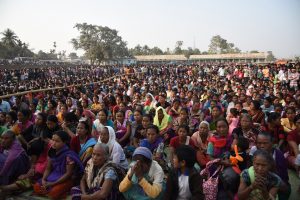 “Yes NPP has not named its chief ministerial candidate yet as it is something to be decided by the MLAs of NPP post the poll. So it’s better not to make any speculations.

Conrad’s sister and former Union minister Agatha K Sangma would contest the polls from the South Tura constituency while his elder brother and sitting legislator James K Sangma will seek re-election from his Dadengre home constituency.

“People of Meghalaya have seen the performance and the governing quality that Agatha Sangma has. It is not only the fact that she is PA Sangma’s daughter. But I think her own qualities are something that people have really liked and seen. Also about James Sangma . The kind of work he has done for his constituency speaks volume about him. People have made up their mind that this time they want quality governance. They want people who can work for people and make a change,” said the NPP Leader.