Parrot lost in Guwahati, founder to be awarded Rs 30,000

According to an newspaper advertisement, Jojo was last seen near Netaji Apartment in the Lalganesh are of Guwahati 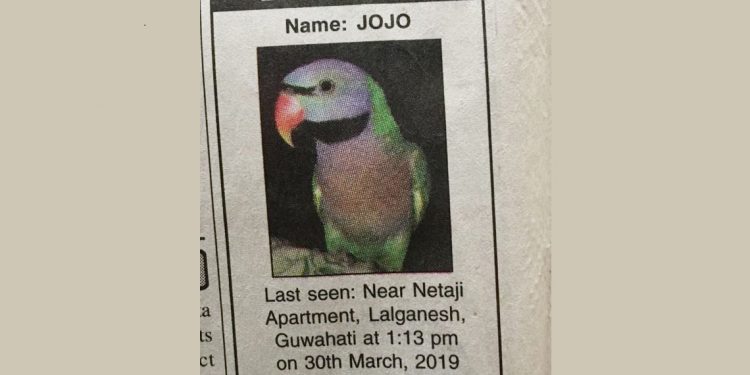 A parrot in Guwahati has gone missing and has evidently left its owners heartbroken. Endearingly named Jojo, its owners have put up an advertisement in one of the city’s news daily calling out the attention of the residents to inform them about Jojo’s whereabouts, in case anyone happens to find the bird.

The owners have offered an reward of Rs 30,000 to whoever finds their beloved pet bird.

With a prominent red beak, Jojo is, undoubtedly, alluring. The bright green feathered bird, seemingly, has shades of purple on its head and shade of beige mixed with violet on its chest, marked with stark black lines between its eyes and across the neck.

According to the newspaper advertisement, Jojo was last seen near Netaji Apartment in the Lalganesh are of Guwahati at 1.13 pm on March 30.