Papon wants Guwahati to be the music capital of Northeast 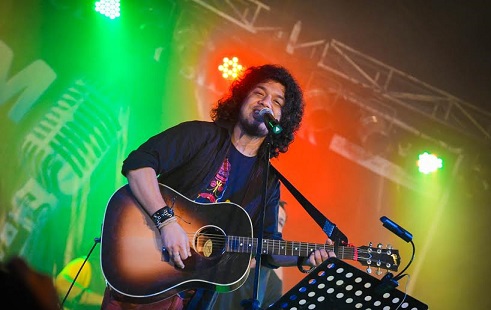 Assam’s iconic contemporary artist, singer-songwriter Angaraag ‘Papon’ Mahanta stated that he is of the opinion that Guwahati should become the music capital of Northeast.

Born and brought up in the city that produced legends like Bhupen Hazarika, music maestro Zubeen Garg, Angaraag feels Guwahati has all that it takes to be on the forefront to represent the rich tradition and culture of music from the vast Northeastern region.

The singer, while performing at the fifth edition of Rongali festival in the city, said that almost every city in the country hosts or organizes music fests on a large scale but Assam has got no such privilege.

“It’s always a pleasure to perform in home grounds. But I am amazed, despite us having a rich musical heritage, why we don’t have a musical fest dedicated to various domestic and international bands? We really need to pull up our socks and work hard to make Guwahati music capital,” said Papon during his performance at the Sonaram field, Bharalumukh on Saturday evening.

Aside from Angaraag, the show also featured performances by prominent artist including The Cultivators, Neel Akash, The Doorbeen and Zublee.

Angaraag further stated that Assam is yet to achieve its prominence in a global level, whether in terms of culture, music or tourism.

“Our festivals are just a small gesture of bringing these talents and providing them the right talents. Rongali is a hub of talents and meeting/interacting with them is a privilege for me,” he added.