The Indian Journalists’ Union (IJU) and its affiliated organisation Journalists Union of Assam (JUA) have expressed serious concern over the propaganda under the NRC authority logo to malign the journalists.

The IJU reacted strongly against the attempt to brand a group of renowned journalists from across the country as ‘anti-national’ for their critical reports and articles on ongoing NRC exercise being undertaken in Assam in different media outlets.

The IJU views this as a hate campaign and crass intolerance against opinions and reports of professional journalists. 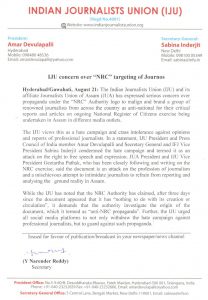 In a statement, IJU president and Press Council of India (PCI) member Amar Devulapalli, and secretary general and IFJ vice president Sabina Inderjit condemned the hate campaign and termed it as an attack on the right to free speech and expression.

JUA president and IJU vice president Geetartha Pathak, who has been closely following and writing on the NRC exercise, said the document is an attack on the profession of journalism and a mischievous attempt to intimidate journalists to refrain from reporting and analysing the ground reality in Assam.

The IJU noted that the NRC authority has claimed, after three days since the document appeared that it has “nothing to do with its creation or circulation”, it demands that the authority investigate the origin of the document, which it termed as ‘anti-NRC propaganda’.

Further, the IJU urged all social media platforms to not only withdraw the hate campaign against professional journalists but also to guard against such propaganda.