Floods have affected as many as 40 villages with a population of over 25,00 people in the Garo Hills 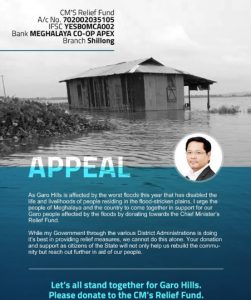 ‘Every contribution counts, #Meghalaya’s #GaroHills is currently facing flood, which has affected lakhs of population. At this time of crisis, your generous contributions will help rebuild the lives of our people.’

Conrad has also attached an appeal with the account details of the CM’s relief fund for generous people to contribute and bring some relief to the flood affected people of Garo Hills in the State.

The account no of the CM’s Relief Fund is:

The chief minister has also sought assistance from the Centre earlier on Tuesday.

The floods in the Garo Hills have claimed two lives in the South West Garo Hills.

An elderly woman and an infant fell into the surging flood waters and were swet away on Thursday morning.

South West Garo Hills has been experiencing unprecedented floods in the Kalaichar-Mahendraganj-Zikzak region.

The flood has been caused by the rising water levels of the Brahmaputra and the Jinjiram rivers breaching banks.

Earlier on Wednesday, flood waters had receded in the Phulbari-Rajabala plains.

This year, the floods have affected as many as 40 villages with a population of over 25,00 people in the Garo Hills.

The deputy commissioner of South West Garo Hills has informed that as many as 15,000 people are presently taking shelter in the relief camps of the district.

Even parts of Khasi Hills region has also been affected in this year’s flood.

Meanwhile, the government has announced seven days of Gratuitous Relief (GR) for the flood-affected people of West Garo Hills district.