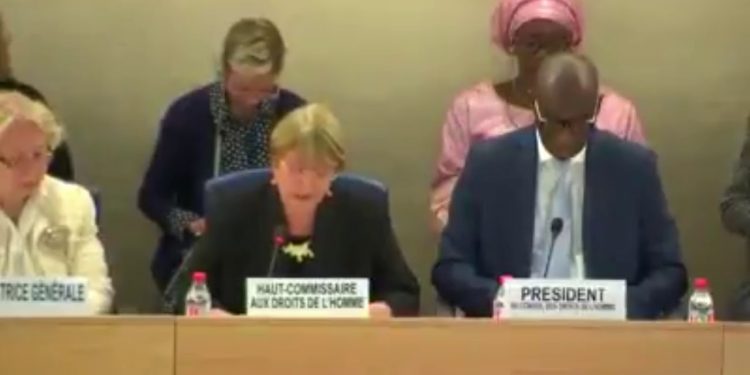 UN Human Rights chief Michelle Bachelet has brought up the NRC issue in her opening statement at the 42nd session of the UN Human Rights Council in Geneva.

Late on Monday, she asked India to ensure that none of those excluded from Assam’s NRC exercise is ‘rendered stateless’.

Also read: Assam: No one to be left stateless, asserts UN refugee chief 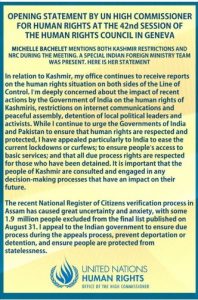 She did not elaborate but analysts say Bachelet has made it clear that the UN expects India to continue provide them with voting rights, protection from harassment by law-enforcing agencies and refrain from any attempt to push them out of India.

This assumes significance in view of union home minister Amit Shah‘s repeated assertions that ‘not one ghuspet (illegal infiltrator) will be allowed to stay on’.

Indian reactions to such an eventuality is not yet clear.

Bachelet has also asked India to ease curbs on communication and free movement in Kashmir and expressed ‘deep concern’ at the situation in the State following the reorganization a month ago.

She has asked both India and Pakistan to protect the rights of the Kashmiris.

Since India is preparing to defend its actions in Kashmir at the UN General Assembly next month in view of an inevitable diplomatic offensive by Pakistan, New Delhi will have to be particularly careful to avoid any linking of the NRC issue with Kashmir.

Pakistan’s Prime Minister Imran Khan has made such an attempt already to project ‘huge persecution of Muslims in India’, little knowing that more Hindus than Muslims stand excluded from the NRC.

But admitting and highlighting that to blunt Khan’s accusations is not an option because of its domestic ramifications for the Modi government.