NPP will write a new vision for Meghalaya: Conrad Sangma

NPP president Conrad K. Sangma on Monday said the people of Meghalaya have lost confidence in the Congress party, which includes even their leaders.

“Not just the people have lost faith and confidence in Congress but even their leaders are not confident in their party, which is the reason that the Congress party president DD Lapang, Deputy Chief Minister and Health Minister are not contesting the upcoming election”, Conrad Sangma said at a public rally at Nartiang in East Jaintia Hills.

He was at Nartiang to seek people’s support for NPP and woe votes for former cabinet minister Sniawbhalang Dhar, who has recently joined the party at a rally in Shillong on January 4.

“I am proud and happy that people of Jaintia Hills have come out in large numbers to support us”, he said, while stating that the coming election was not about Congress, NPP or about individual candidates but for the people and the overall development of the state of Meghalaya.

“It is a very important election for each and everyone one of us. In the whole state there is a wind of change and the people are looking for a change as the people of Meghalaya have lost confidence in the Congress party”, Conrad said.

“Congress leaders have no hope for the party. Why should the public have confidence in Congress party? They know that there is no future of Congress party in India”, Conrad Sangma said.

Citing 2013 election in Meghalaya, where Dr Mukul Sangma promised Rs. 5000 to the women of Selsella constituency, which was transferred to their accounts, Conrad said, “After the election, the money was deducted from their daily wage earning from MGNREGA, which was a loan given to the women from the bank”.

Making a scathing attack on chief minister, Conrad said, “Dr Mukul Sangma has taken away coal from the people, future of the children and now trying to take away the land of the people”.

He promised that NPP would fight for the rights of the people as it has continued to raise the issue of coal in the parliament on a regular basis.

“If you are with us, we will create a new Meghalaya with a new vision. Through the mission document for this election and beyond we want to change the future of our state”, he said, while specifying that NPP has a vision for sectors like coal, agriculture, education, tourism, health amongst others. 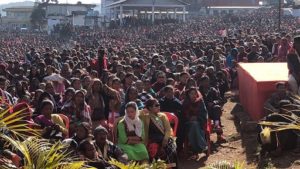 The theme of the rally was “Mission 2018: NPP for a New Meghalaya”.

He also categorically indicated that the wave for a resurgent and new Meghalaya was in the offing and people of Jaintia Hills have to unite.

He urged the people to carry the information to all areas of Jaintia Hills that NPP is an option for good governance and a party to write a new vision for Meghalaya.

NPP leader Prestone Tynsong said Dr Mukul Sangma’s policies have wreaked havoc on the economy and fiscal health of the state. Recalling the series of events that led to the NGT ban, Tynsong said that he had impressed upon the CM to take the issue of the NGT seriously but the CM did not listen to his advice to set up a cabinet sub-committee to look into the complaints forwarded by the NGT.

He held Mukul personally responsible for the ban and for destroying the economy of the state and the livelihoods of thousands of people of Meghalaya.