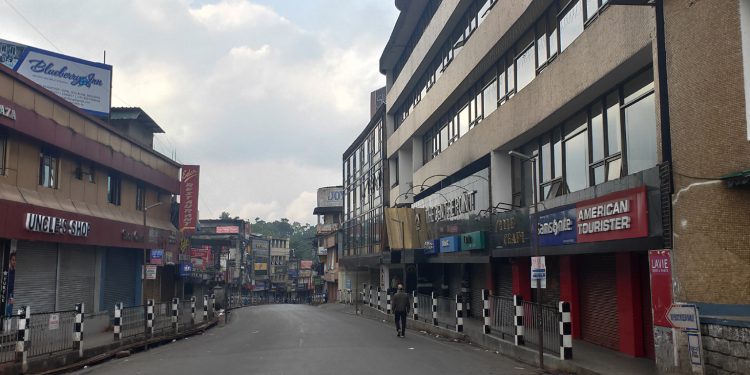 A total shutdown was witnessed in Khasi and Jaiñtia Hills of Meghalaya in view of the bandh called by the North East Students’ Organisation (NESO) against the Citizenship (Amendment) Bill (CAB).

As soon as the timing of the bandh commenced, roads were blocked with stones besides burning of tyres on both national highways and state roads.

Police said that around 5.45 am, a police Gypsy (ML02-5052) allotted to the Special Force-10 of the Meghalaya police was set ablaze by miscreants at a junction near FCI, between Mawlai Mawroh and Mawlai Mawdatbaki.

When the Gypsy was passing via FCI junction, miscreants asked the driver to down and poured petrol on the vehicle and set it ablaze. The Gypsy was completely damaged.

A petrol bomb, hurled by miscreants, also fell into a compound near Qualapatty but police doused the fire.

Vehicles parked on the road were also vandalized at Laban and some parts of Shillong.

Roads wore a deserted look, as no vehicles ply during the bandh period except those in emergency cases.

Offices of both the state and Central governments in Shillong recorded thin attendance.

Shops and commercial areas remained close including Khyndai Lad and Ïewduh, the main market in Shillong.

A group of youth also took out a march at Laban towards the resident of BJP MLA, Sanbor Shullai and shouted slogans against the CAB and Prime Minister, Narendra Modi, and Union Home Minister, Amit Shah.