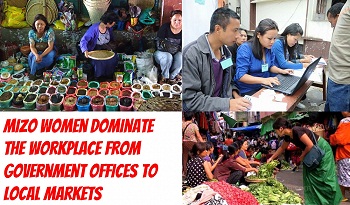 Mizoram (at 59 per cent) tops the list. Photo Credit - hrkatha.com

The proportion of working-age women who are actually employed dropped from 29.6 per cent to 25.8 per cent, or about a quarter, between 2013-14 and 2015-16, according to statistics presented by the Government in Lok Sabha last week. This was after the proportion had risen from 25 per cent in 2012-13. These figures, tabled by the Women & Child Development Minister Maneka Gandhi in reply to an unstarred question, were from Annual Employment-Unemployment Surveys (EUS) that measured the worker population ratio for women and girls aged 15 years and above. There was a two-year gap between the 2013-14 survey and the subsequent one.

A report published in the The Indian Express stated that only in four States did the worker population ratio for females exceed half in 2015-16, while Meghalaya (49.9 per cent) came close to half. Mizoram (59 per cent) tops the list.

The report further stated that most of the northeastern States have relatively high ratios for female participation. Of the eight States in the region (including Sikkim), seven figured among the 10 States with the highest ratios in 2015-16. Assam was the exception, with 24.5 per cent. The other three States were Chhattisgarh (54.2 per cent), Jharkhand (48.2 per cent) and Andhra Pradesh (47 per cent). Outside the top 10, one more State had a ratio over 40 per cent — Telangana, with 42.7 per cent.