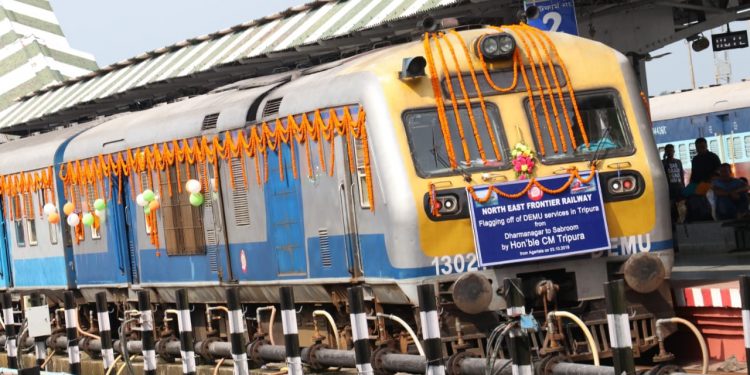 Sabroom is 135 km south of Agartala and located along Indo-Bangla border.

With the extension of train services up to Sabroom, the seven northeastern states now would be able to access Bangladesh’s Chittagong international sea port for carrying goods and machinery avoiding the existing surface roads passing through the mountainous terrain.

Chittagong international sea port is just around 70 km from Tripura.

“As the DEMU trains, already plying in metropolitan and busiest cities in the country, can ply in both directions, it does not require any cumbersome reversal at terminal stations. The coaches are also better adopted with more seating capacity,” he added.

There will be eight coaches in each DEMU train to be plied twice a day in the Dharmanagar-Agartala-Sabroom section.

First ever DEMU train services in Tripura was flagged off today from Agartala by Shri Biplab Kr Deb, Chief Minister of Tripura in presence of other dignitaries. pic.twitter.com/10NbAyMfKq

The NFR, one among the 17 railway zones in India, is responsible for extending the railway lines and maintaining train services in seven districts of West Bengal and five districts in north Bihar, besides the eight northeastern states, including Sikkim.

The NFR has laid new railway tracks at three places along the India-Bangladesh border — Agartala, Sabroom and Belonia.

The Rs 972-crore Agartala (Tripura) and Akhaura (Bangladesh) project is now under construction and these railway lines would facilitate the carriage of passengers and goods from the northeastern states through the Bangladesh railway network.

Spending Rs 1,150 crore, the NFR has extended the 110-km railway lines up to two bordering sub-divisional towns — Sabroom and Belonia — both cities situated along the Bangladesh border, facilitating the link with the railway networks of the neighbouring country.

With southern Tripura’s Sabroom located around 70 km from the Chittagong sea port in southeastern Bangladesh, India has already got Bangladesh’s in-principle consent to use the international port to ferry goods to and from the northeastern states.