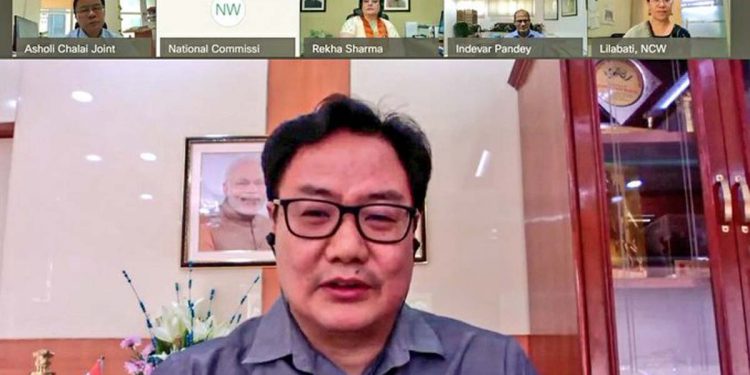 While issues concerning Northeast women living in metros continue to make headlines, Union sports minister Kiren Rijiju on Wednesday appealed to the National Commission for Women to work for a change in social mindset of the people.

“Social and racial discrimination is a big issue. I appeal to the chairperson and NCW to fight more against the social mindset of people,” said Rijiju while addressing a webinar on issues and challenges faced by northeastern women in metro cities and empowering them.

The National Commission for Women (NCW) organized a one of its kind webinar on “Addressing Issues and Challenges faced by North Eastern Women in Metropolitan Cities and Empowering Them” to discuss the problems and discrimination faced by women from Northeast.

NCW being concerned about the safety of women from north east facing problems both as a woman and also due to their status of being a migrant, conducted this webinar which deliberated upon the issues and challenges faced by them, a statement issued by the NCW said.

In her inaugural address, chairperson Rekha Sharma spoke about the various initiatives launched by NCW and its dedicated Northeast Cell to empower women of the northeastern region.

“We have trained young girls from north east to be successful entrepreneurs as we want them to be so empowered that they become job-givers,” Sharma said.

The panel discussed in detail the need to impart legal awareness among the north eastern community so that they know whom to approach in times of distress.

The experts discussed the need for a consolidated data and detailed study to understand the crimes against north east women in metro cities.

It also suggested that models like the Special Police Unit for North Eastern Region (SPUNER) and 1093 helpline for north east citizens should be replicated in other metro cities for redressal of their grievances.

The panellists discussed the need to bring northeastern teachings, its geography, culture, polity and history into the curriculum of schools and colleges.

The panel highlighted the importance of art to bring awareness about the culture of Northeast in mass media as it would also help improve the dialogue between people from Northeast and others in general.

A few suggestions also came out of the panel discussion.

Safety audit of paying guest /rental accommodation for students of Northeast was suggested so that they have a list of safe places when they come to the city.

Sensitization and awareness programmes for employers, need to plug gaps in the law so that there is effective implementation of the existing provisions and incubational training for girls/women coming from Northeast were some other suggestions.

Implementing recommendations of Bezbaruah Committee in a speedy manner, Hindi language to be taught to address language barrier in metro cities and creation of more women friendly hostels for north eastern women were some of the suggestions that were kept forward by the panellists.

Had a useful sesson with National Commission for Women Chairperson @sharmarekha ji and other eminent penalists to discuss about "Issues and Challenges faced by North-Eastern Women in Metropolitan Cities & Empowering Them. pic.twitter.com/vPqfM5IpGs