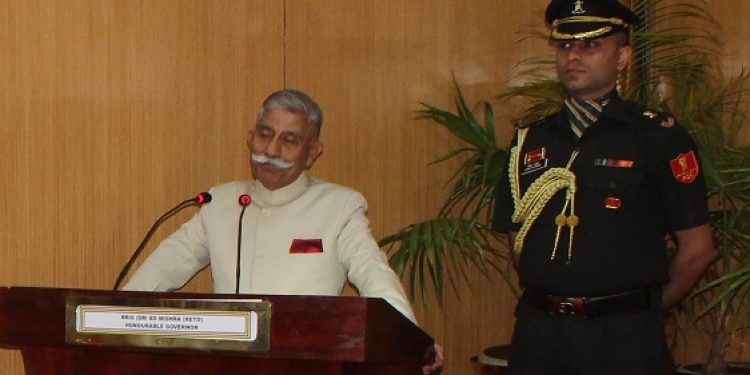 Arunachal Pradesh Governor Brig (Retd) B D Mishra on Saturday called upon the battalion commanders and other station officers of the Madras Regiment to emulate the evergreen guidelines of ‘nation first, troops next and self last’.

The evergreen rule was set by Field Marshal Philip Walhouse Chetwode, the then Commander in Chief of the Indian Army who was instrumental in Indianization of the armed forces and setting up of the Indian Military Academy at Dehradun.

Mishra who was speaking at an event conducted at the Madras Regimental Centre in Wellington of Kerala as a part of the 33rd Biennial Battalion Commanders Conference (BBCC) of the Madras Regiment further emphasized that the battalion commanders must have loyalty to the constitution, superior officers and their troops.

“You (battalion commanders) must have professionalism by being perceptive, thorough, transparent, adoptive and tactful. You must accept the challenge from your own self for improving your performance day after day, the Governor said.

Citing an example of Field Marshal SHFJ Manekshaw’s interaction with the then Prime Minister Late Indira Gandhi, Mishra said the Battalion Commanders must be in all situations, prepared to keep the nation’s interest first, his troops’ interest next even at the cost of their job.

Stating that the present day battalion commanders are well trained, motivated and guided to excel in earning a good name for their regiment, the governor advised them to be cent percent concerned about their actions and inputs.

The Governor shared his experiences as the constitutional head of the state of Arunachal Pradesh and his priorities in education, administration, transparency, public welfare and women empowerment. He advised the officers to create bonhomie with the civilian population, where ever they are posted, particularly when deployed in international borders.

Earlier in the day, the Governor accompanied by First Lady Neelam Mishra laid wreath at the war memorial of the Madras Regimental Centre.

Joined by senior serving officers and veterans of the Regiment, the Governor remembered the martyrs for their supreme sacrifice made for the Motherland.

Later, the Governor attended an interaction programme with the junior commissioned officers of the regiment.

The Madras Regiment is one of the oldest infantry regiment of the Indian Army, originating in the 1750s. The regiment took part in numerous campaigns with both the British Indian Army and the post-independence Indian Army.