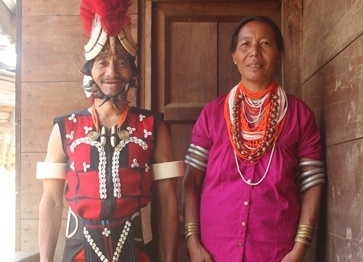 The Sanctuary Nature Foundation (SNF), a leading wildlife organisation of the country, has released a grant of Rs 50,000 to Nagaland’s hunter turned conservationist Alemba Yimchunger.

“We are pleased to announce the release of a monetary grant worth Rs. 50,000 from our flagship Mud on Boots Project to grassroots conservationist Alemba Yimchunger from Nagaland,” Sanctuary Nature Foundation said in a statement.

Fifty-year-old Alemba has worked as a Camp Guide for the Forest Department of the Fakim Wildlife Sanctuary for the past three decades.

Born in Fakim village at the eastern end of Nagaland, he grew up hunting wildlife in the rich forests around his village, as is culturally-expected amongst many tribes in northeast India. However, as the years turned, Alemba became increasingly distressed by the dwindling wildlife in the region.

In the 1980s, the young Naga defied cultural norms by giving up hunting and subsequently joined the Fakim Forest Department to help conserve the stunning biodiversity of his home.

His 30 years of service to the Fakim Wildlife Sanctuary have won Alemba the respect of senior forest officials and researchers alike.

He has been instrumental to the success of numerous expeditions and conservation initiatives in and around Fakim, including the conservation planting of Cephalotaxus mannii, a threatened species of tree; the distribution of solar lamps, seedlings and poultry to members of the community; camera-trapping exercises; and guiding and hosting researchers from across the country.

In fact, Alemba served as a guide to Dr N Odyuo, a Scientist from the Botanical Survey of India, who discovered a plant species new to science in the area.

Despite his extensive knowledge of regional biodiversity and long years of work in the Fakim Wildlife Sanctuary, Alemba Yimchunger earns a salary of just Rs. 3,450 a month and is yet to be regularised into the fold of the Forest Department.

“It takes uncommon courage to hold so steady a course in the face of such hardships, and yet, after all these decades, he still walks the forest with his enthusiasm untainted, his passion undiminished,” said Rohit Naniwadekar, a Scientist with the Nature Conservation Foundation.

Naniwadekar said Yimchunger represents the first generation of wildlife conservationists from Nagaland, and for many young researchers and Forest Department staff who visit the area, he has been and continues to be a perennial source of inspiration.

The financial support extended to Alemba is in recognition of his three-decades of conservation work, with the hope that it will ease some of the financial strain that he faces, SNF said in the statement.

“The Mud on Boots Project was established to empower and support grassroots warriors like Alemba. Identifying such unsung heroes would be impossible without the help of our trusted network of scientists and conservationists, and we would like to thank Shashank Dalvi, Dr. Rohit Naniwadekar and Lansothung Lotha for bringing Alemba’s work to our attention,” said Cara Tejpal, who heads the Mud on Boots Project for the sanctuary.