Amid resumption of informal talks with the Centre and strained relationship with Nagaland governor RN Ravi, the NSCN (I-M) for the first time on Sunday produced the original copy of the Framework Agreement and “Ravi’s manipulated copy” of the pact.

It said both the copies have been furnished for public scrutiny on how Ravi, who is also Centre’s interlocutor for Naga peace talk,  ‘misinformed and misled’ the government of India. 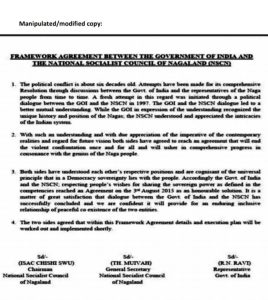 “The battle over the Framework Agreement is now before the public domain,” the ministry of information and publicity of the outfit said in a statement.

It said there is no running away from either party but to set the record straight in order to reset the Indo-Naga political talks in correct perspective.

According to the NSCN (I-M), it is a matter of restoring the credibility of the government of India that was badly damaged in the hands of its representative.

It said the issue is of serious nature as the very essence of the agreement had been found missing or manipulated in the copy circulated by Ravi to his favoured Naga civil society organisations, including the Naga National Political Groups (NNPGs) to give different narratives.

Titled “Where is Mr. RN Ravi’s Response”, the statement said much water has flown down the river since the day NSCN took the pain to expose the misdoings of Ravi. 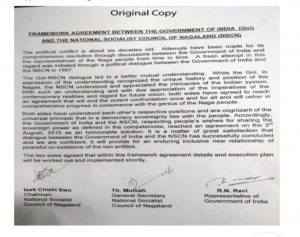 The NSCN (I-M) sought to point out that the talk is on Naga political issues for all the Nagas and covering all the Naga areas. But Ravi surprisingly reduced it to the Nagaland state only, making not only a mockery of the Framework Agreement, co-authored by him representing the Prime Minister of India, but also insulting the Nagas as a whole, it said.

Pointing to Ravi’s what it called off-repeated catchphrase “one issue one solution”, the outfit wondered that he signed two agreements the “Framework Agreement” with the NSCN and the “Agreed Position” with NNPGs. “Where is he trying to take the Nagas to,” it asked.

The outfit alleged that he simply wants to keep the Naga people divided by signing a parallel agreement.

After manipulating the contents of the Framework Agreement, Ravi tutored his favoured Naga groups on how to look at the pact and said it is simply the recognition of the Nagas’ past history and nothing beyond that. The same way he misled the Parliamentary Standing Committee on Naga Peace Accord, the statement said.

It also said Ravi briefed the committee that the contours of the agreement had not been spelt out in the agreement.

He was further quoted as stating that it was implied in the agreement that some special arrangement will have to be made for the Nagas.

“This is simply Ravi’s twisted interpretation of the Framework Agreement,” it said.

The outfit also alleged that Ravi, along with former Nagaland chief minister and former governor, had been surreptitiously working together and that they are responsible for holding the NNPGs in the grip and misleading the government of India, particularly the Prime Minister.

On the current status of the talks, the NSCN put on record that PM level talk has not gone down to the Intelligence Bureau (IB) level talk.

Saying that the interlocutor carries the mandate of the PM, the NSCN said it has been talking to Ravi as interlocutor and not as governor.

“But since Ravi created imbroglio in the talk process, the PM gave mandate to continue the talk to a team of IB as a Fast Track Channel for communication and clear the pending points in the competency.

“Once everything is clear the agreement will be at political level of the Prime Minister,” it added.

The outfit also alleged some high-handedness on the part of Ravi.

It accused Ravi, who represents the Prime Minister, of making the Ceasefire Review Committee and Ceasefire Monitoring Group to nothingness by dismantling the officially set up mechanism.

“This is a serious matter as it constitutes a part of the Indo-Naga ceasefire that was set up in order to streamline the smooth functioning of ceasefire ground rules from both the parties,” it said.

Varun Dhawan and Kriti Sanon in Arunachal Pradesh, ‘Bhediya’ to be shot at frontier state