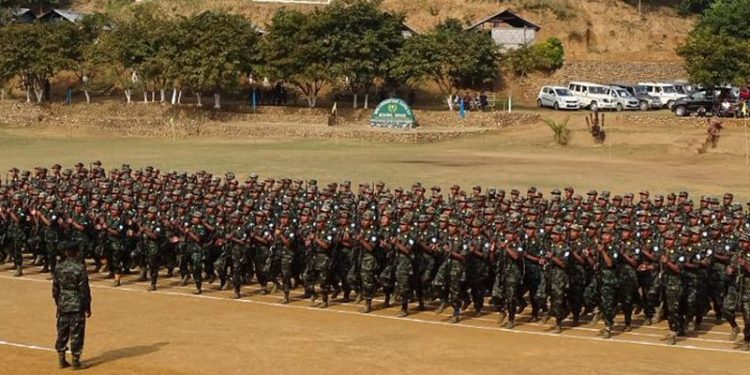 NSCN (IM) has sought clarification from the Indian government for terming it as a “terrorist group”.

The reaction from the outfit comes four days after the National Investigation Agency (NIA) filed a chargesheet against two cadres of the outfit.

The NIA in a press statement, issued on June 11, 2020, regarding the filing of the chargesheet, termed NSCN(IM) as a “terrorist group”.

NIA is a state agency established by the Indian government to combat terror in India.

The outfit, which has been engaged in peace talks with the central government, said if the Indian government allows NIA to “run amok”, it would be a “breach of commitment” and “undo the hard-earned achievement of the Indo-Naga talks”.

“It would be a breach of trust and commitment if #GOI allows #NIA to run amok to fool the world communities and undo the hard earned achievement of the Indo-Naga political talks,” the ministry of information & publicity of NSCN(IM) tweeted on Sunday.

“NSCN puts on record that this misplaced tag ‘terrorist’ be clarified,” it added.

It would be a breach of trust and commitment if #GOI allows #NIA to run amok to fool the world communities and undo the hard earned achievement of the Indo-Naga political talks. NSCN puts on record that this misplaced tag ‘terrorist’ be clarified. @PMOIndia @NIA_India

In January, Nagaland governor and Centre’s interlocutor for Naga talks, RN Ravi said the negotiations between the government of India and the Naga political groups successfully concluded.

Ravi said this while addressing the first day of the fifth session of the 13th Nagaland Assembly in Kohima.

The NIA filed a chargesheet against 2 cadres of NSCN(IM) on June 11, 2020 in connection with a “terror funding case” in Delhi involving the outfit.

The investigating agency filed the chargesheet against a case, RC-26/2019/NIA/DLI before the Special Court of the NIA at Patiala House in New Delhi.

The case was related to the recovery of Rs 72 lakh in cash by the Special Cell of Delhi Police from the possession of Alemla Jamir, wife of Phungthing Shimrang, a resident of Diphupar B village in Dimapur at Domestic Airport in New Delhi on December 17, 2019.

Initially, an FIR (No 228/2019) was registered on December 17, 2019 at the Special Cell police station in New Delhi and later, the case was re-registered by the NIA.

“Investigation revealed that accused Alemla Jamir @ Mary Shimrang @ Atula Tonger and Masasasong Ao (subsequently arrested by NIA) had entered into a criminal conspiracy and directly raised, collected and layered terror funds through a maze of bank accounts, business entities on behalf of terrorist group NSCN (IM),” the NIA said in the press statement.

But, the terming of the outfit as “terrorist group” in NIA’s statement has been strongly reacted by the outfit.

The NIA further stated: “Alemla Jamir was occupying the post of Kilonser (Cabinet Minister) in the terrorist group.”

NIA claimed Masasasong Ao and other members of the group helped Alemla in extortion and channelization of terror funds and commit disruptive acts.