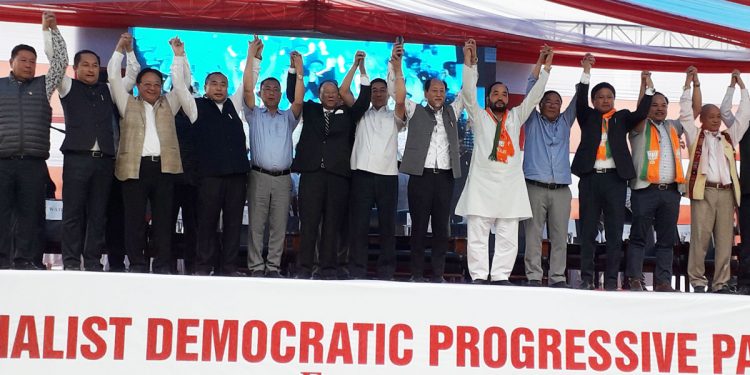 The ruling Nationalist Democratic Progressive Party (NDPP) on Monday said it stands by the Nagaland government’s recent statement on the overall law and order situation and related issues in the state.

NDPP is the major partner of PDA.

The PDA categorically rejected the “rhetoric” of the Opposition parties demanding the stepping down of the PDA government.

The media and communication committee of the NDPP in a statement said the PDA government is a democratically elected government and enjoys the mandate of the people which has been reinforced in successive Lok Sabha and Assembly by-elections.

The NDPP said the PDA will continue to carry out its constitutional duties with utmost comment and dedication in the greater interest of the people.

The ruling party said it issued the release to set the record straight with the recent statements of the Nagaland Pradesh Congress and NPF president Shurhozelie Liezietsu.

The Congress and the NPF demanded that the PDA government step down on moral ground following Governor RN Ravi’s letter to chief minister Neiphiu Rio last month expressing serious concern over the law and order in the state.

“It is indeed ironical to observe the issue of ‘moral grounds’ being raised by the NPF president as he should be the last person to be speaking about political morality,” the NDPP said while pointing out to his “removal” as chief minister.

On the state Congress, the party said its president K Therie, who is a former expelled Congressman himself, is barking up the wrong tree without fully understanding the facts.

It added that former chief minister and Congress veteran SC Jamir is also apparently unaware of the present realities.

The NDPP urged the opposition leaders to understand the redundancy of the outdated rules and stand up for the principles of democracy instead of trying to take the state back to the 1950s and 1960s.