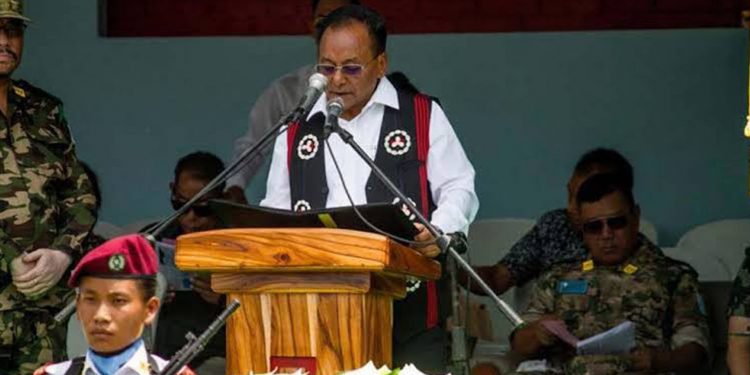 On the 41st Raising Day of the National Socialist Council of Nagalim (NSCN) on Friday, its chairman Q Tuccu said, “Nagas must also move to change for the better or perish.”

In a statement to the media Tuccu further said, “We must change in all fields through revolution.”

“Revolution will stay in our land so long as our sovereign right to decide our future by ourselves is suppressed,” he further said.

He further said that the Naga national resistance movement began the day the Nagaland was invited to join the Indian Union in 1950.

“But the proposal to join the Indian Union was flatly rejected by the Nagas,” the statement added.

“In response to that Jawaharlal Nehru, the first Prime Minister of India stated, ‘Even if heaven falls and the whole country goes to pieces and rivers run red with blood, I will never allow the Nagas to be independent.’”

“Thereafter, the Indian government sent hundreds of thousands Indian armed forces personnel to Naga country with a view to subduing the Nagas with brute force,” the statement said.

“But, by His grace, the Naga people survived the onslaught of the India colonial forces,” it further added.

“The so-called Nagaland state embracing a part of the Naga people and a part of Naga territory was created in 1963 purely with a view to dividing the Nagas,” the statement added.

“The Indian government won over the hearts of some top leaders to its side and finally they surrendered to the enemies in 1968,” the statement added.

“But, the Naga people led by national leaders stayed the course.

“The infamous Shillong Accord was signed in 1975 by some NNC leaders but it was condemned by the National Assembly under the leadership of Isak and Muivah,” the NSCN chairman further said.

“The leaders of the Shillong Accord plotted a military coup where top national leaders including Isak and Muivah were arrested to be executed,” he added.

“Hundreds of faithful national workers were killed. But, the unique history of the Nagas was saved from the accord of treason,” he further said.

“In 1988 SS. Khaplang staged another coup d’état in collaboration with the enemies, where hundreds of workers and public were killed,” Tuccu said.

“But revolutionary patriots under the leadership of Isak Chishi Swu and Th. Muivah remained loyal to the nation,” he added.

“We survived the ruthless offensive of their collusion forces,” he further said.

“The Government of India and NSCN signed the historic Framework Agreement on August 3, 2015,” Tuccu said.

“The agreement is historic because the Indian government recognizes the unique history and sovereignty of the Nagas,” Tuccu further said.

“Government of India has also recognized the territory of the Nagas and the legitimate right of the Nagas to integration,” he added.

“The agreement also says the creation of PAN Naga Hoho, a statutory body which will deal with cultural affairs, social, integrity and interests of the Nagas,” Tuccu said.

He further expressed his belief that the agreement will open a new era for a new relationship between the peoples if the Indian government doesn’t go back upon its word.