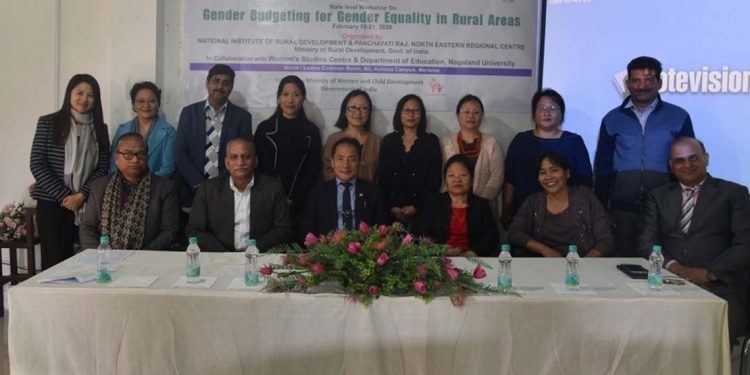 Participants at the state-level workshp on gender budgeting and gender equality in Nagaland University on Wednesday. Image credit - Northeast Now

The workshop began at the Merima Campus of the university on Wednesday.

The workshop plans to review the rational role of gender budgeting as a tool for gender equality and also examine the policy initiatives, programmes, schemes and projects for gender mainstreaming and gender-inclusive development.

The workshop is being sponsored by union ministry of women and child development and organised by Nagaland National Institute of Rural Development and Panchayati Raj, North Eastern Regional Centre, in collaboration with the Women’s Studies Centre and the department of education, Nagaland University.

Speaking at the inaugural programme, adviser to information and public relations and State Council for Educational Research and Training Toshi Wungtung said political empowerment for the women in the state is the need of the hour as it is a tool to formulate policies.

He said gender budgeting should be sustainable in approach while regulating and forming various policies in different sectors of society.

Wungtung called for empowering women politically and partnering with them in evaluating and formulating policies in the state.

He said although the state government had passed a resolution that every department must go into gender budgeting there is still much needs to be done.

Wungtung hoped that the workshop will bring about a sustainable approach towards empowering women on gender budgeting for an equal and healthy society.