Farmers, artisans and master craftsmen of Nagaland will get the best prices in the market: TRIFED MD 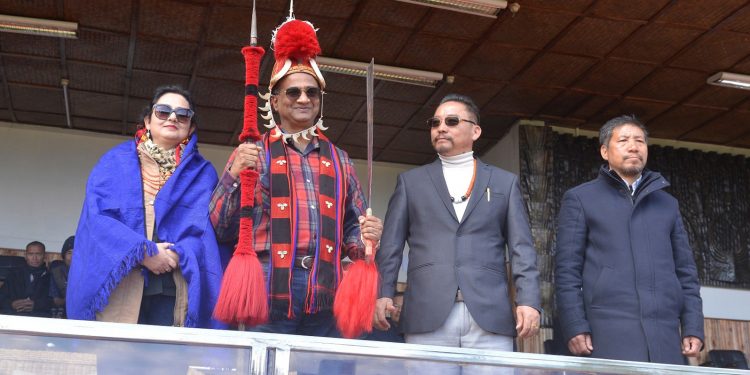 TRIFED managing director Pravir Krishna said the exotic organic products of the state like turmeric, ginger and hand-woven artifacts produced by the local artisans need to be promoted and marketed.

Krishna said this while speaking in the morning session of the ninth day of the cultural event ‘Cultural Connect’ as honoured guest at the Hornbill Festival at Naga Heritage Village, Kisama, on Monday.

Krishna said a MoU was signed between the TRIFED and the department of underdeveloped areas, Nagaland, to assist in marketing the various indigenous products of the state across the country and the world.

While highlighting the Van Dhan Scheme, which means wealth of the village, he said the government wants to set up at least 100 self-help groups (SHGs) under the scheme in Nagaland.

He assured that the farmers, artisans and master craftsmen of the state would get the best prices in the market across the country and the world.

Krishna said TRIFED believed that the wealth of the forest should belong to the people who live in the forest.

He said a group of 300 tribal SHGs was trained and provided a grant to produce value-added products and market them in the international market.

“The organic products of Nagaland too should find good value in the international market,” he added.

The cultural extravaganza presented by the art and culture department began with the presentation of war dance called ‘Ritsso Shari’ by the Lotha cultural troupe followed by ‘Milakpha’ (fire making) by the Yimchungru cultural troupe.

The adviser to the underdeveloped areas department, Bongkhao Konyak, was the host of the morning session of the cultural event.

Former Indian football team captain Bhaichung Bhutia and vice president of the All India Football Federation Larsing L.D. Sawyan were the special guests of the afternoon session of the cultural event.

Bhutia said being from the Northeast he was proud of the Hornbill Festival, a festival which the people from entire India as well as from across the globe look forward to attending it.

The Hornbill Festival has captured the interest of people from across the country and brought the Northeast region and its people back on focus, he added.

Bhutia commended the way in which the Hornbill Festival highlights the rich and colorful culture of the Nagas and encouraged the rest of the northeastern states to organise such festivals.

“The Hornbill Festival is a great example of promoting one’s state and its people,” said Bhutia.

The rest of the states can draw inspiration from it and create something that will have a positive impact on the entire Northeast,” he added.

Sawyan said the Nagas have a unique identity of culture which is well preserved, celebrated and showcased through the Hornbill Festival which is getting bigger and bigger every year.

He hoped new changes will take place across the country beginning from the Northeast with the Naga people playing an active and leading role in taking the northeastern states forward.