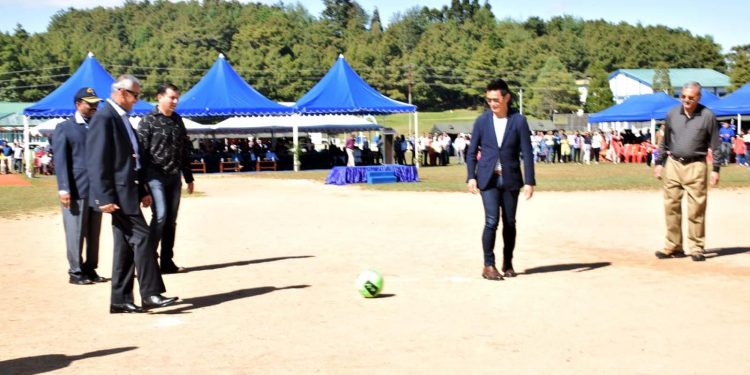 Bhutia joined the celebration as the chief guest.

The Eastern Air Command (EAC), which is one of the five operational commands of the Indian Air Force (IAF), currently headquartered at Shillong in Meghalaya, was established on May 27, 1958 as No 1 Operational Group.

The No 1 Operational Group was upgraded as Command on December 1, 1959.

The EAC Headquarters has been commemorating its diamond jubilee this year organizing a series of events.

A community lunch (Bara Khana) was organized for the air warriors and their families on Saturday.

Bhaichung Bhutia also addressed the air warriors on the occasion.

In his address, the former Indian football team captain, thanked the Indian Air Force (IAF) for their services extended during the natural calamities.

He further mentioned how the Subroto Mukherjee Football tournament organised by the IAF proved to be the stepping stone in his career in football, said official sources.

The air warriors and their families participated in the celebration of the golden jubilee with enthusiasm.

The event boosted the camaraderie and bonhomie among all the ranks of the IAF.

“He interacted with Air Warriors, families & children and thanked IAF for the services extended during the natural calamities,” the PRO added.

He interacted with Air Warriors, families & children and thanked @IAF_MCC for the services extended during the natural calamities.@SpokespersonMoD pic.twitter.com/MHLq5xT2zn

It may be mentioned that initially No 1 Operational Group was set up with its headquarters at Calcutta (now Kolkata).

It was upgraded as a Command on December 1, 1959, but during the Indo-China conflict in 1962, practical experience highlighted the difficulty of Calcutta being the location of EAC and on June 10, 1963, the Command HQ was shifted to Shillong.