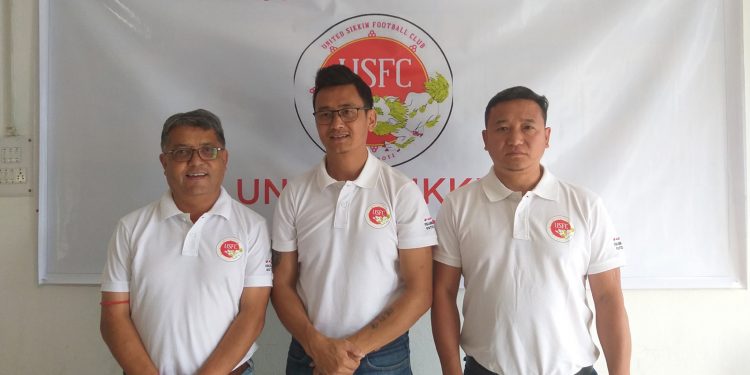 A popular club of Sikkim, United Sikkim Football Club, has been shut down after a journey of 15 years on Sunday.

The founders of the club, Bhaichung Bhutia, Arjun Rai and Sherap Lepcha, during a press conference at Football House here announced that United Sikkim FC would cease to exist from Sunday..

United Sikkim Sporting Club was formed initially by the trio in 2004 and later it turned into a professional club for a short period in year 2011.

United Sikkim FC (USFC) was the first club from Sikkim and second from Northeast to play in the highest league of the country, I-League, after turning full into a professional club during that period.

Making an announcement in this regard, former Indian team skipper and founder of United Sikkim FC, Bhaichung Bhutia mentioned that it was a very difficult and painful decision to shut down the United Sikkim FC after 15 years of existence.

He said, “It was not easy but very painful to take the decision of shutting down the club but the decision has been taken after a thorough discussion on different aspects.”

Bhutia expressed that it has been a great 15 years long journey of the club and has witnessed proud and difficult moments.

He expressed that the club worked hard to build a brand name for Sikkim in the Indian football over these 15 years so it was very hard to take such strong decision.

Bhaichung mentioned that the decision to shut down the club has been taken for two major reasons.

“We want now to focus more on grassroot football by organising coaching camps and tournaments at the grassroot level,” said Bhutia.

“Secondly, there has been huge conflict of interests since two of us are now a part of Sikkim Football Association,” he expressed.

Bhaichung Bhutia and Arjun Rai are currently in the executive body of the SFA.

Bhutia explained that it was not much fair for other clubs if they run the club which plays leagues and tournament organised by the SFA.

Bhutia expressed deep gratitude to all players, fans and other supporters for being a part of the USFC family for the past 15 years.

Bhaichung mentioned that United Sikkim FC was the first club from Sikkim and only the second club from Northeast to play in the highest league of the country, I-League, during that period.

He informed the club had provided the opportunity to 14 to 18 local players from Sikkim in the highest league of the country.

The club also sent players for trials in different clubs of the country, he added.

“Komal Thatal was also sent by United Sikkim FC to play Manchenster Cup, where he was selected for U-14 Indian team academy. One of the biggest products of United Sikkim FC is Sandesh Jhingan, who is presently a member of the Indian football team,” he said.

In these 15 years of journey, United Sikkim FC lifted the Sikkim Premier Division League for four times and won Independence Cup twice along with winner of ONGC Cup and LD Kazi Cup and is the only club from Sikkim to participate in IFA Shield and Durand Cup and winner of second division I-League.

Bhaichung mentioned that United Sikkim FC was the only club in India to get sponsorship by sports giant Nike in the I-League and by Lotto last year.

Sherap Lepcha, who played for East Bengal and Mohun Bagan, stated that the club provided opportunity and exposure to a lot of footballers from Sikkim.

Arjun Rai, founder and senior manager of the club, informed that the club had spent around Rs. 5 crore in 15 years mainly to promote and develop local football talents.