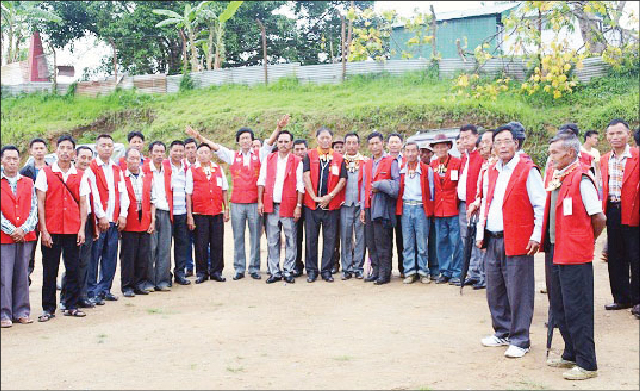 In a press release, NGBF president, Shahlem Konyak, and general secretary, Shikuto Zalipu, described the declaration as ‘more intimidating’ than rational and realistic approach to the current Naga political imbroglio.

While asserting that exclusiveness will never bring lasting peace, NGBF expressed apprehension that ‘any exclusive solution can belie all our expectations’.

The federation maintained that such ‘arrogant and unpalatable declaration to be imposed on the Nagas is unacceptable’.

NGBF also affirmed that it was committed to peace and harmony of the Nagas wherever they were. The federation said it would continue to work for inclusive solution that would take everyone on board for a lasting peace solution to the protracted Naga political problem.

While stating that presently the Union Government was having political dialogue with seven Naga political groups, NGBF said it was the bounden duty of every Naga citizen to play a mediator role and not biased.

The Chakhesang Public Organization (CPO) has also reacted to the spate of statements and rejoinders over the August 23 joint declaration by Naga Hoho and United Naga Council at Senapati village under Manipur.

The CPO in the statement issued by its president Kekhwengulo Lea and general secretary Mutsivoyi Kotso reiterated that its stand over Naga issue was unwavering before Nagas and even when some tribes walked out of Naga Hoho, it remained for the greater interest of Nagas.

The organization reminded that the Naga Hoho president, who is in the eye of a storm, had ignored the condition given by his own parent hoho as well as from within Naga Hoho which led to some tribes resigning from it.