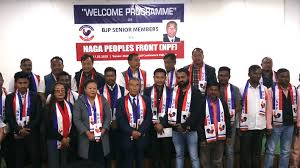 The Bharatiya Janata Party (BJP) in Nagaland has suffered a setback as a total of 22 party workers of the state joined opposition Naga People’s Front (NPF) .

The members of the saffron party, including some top leaders of the state, switched to NPF in protest against the Citizenship Amendment Act (CAA).

NPF president Shürhozelie Liezietsu welcomed the BJP members to the party fold in a programme held in Dimapur on Tuesday.

“It is expected that more such right-thinking leaders will join the party soon,” Liezietsu said in a statement.

While welcoming the BJP leaders to the NPF fold, he said they have taken the right decision at the right time and right moment.

“Many regional political parties came into being and when they are defeated, the party vanished,” he said.

Among the 22 senior BJP leaders, who have decided to desert the party and join the NPF, include convenor of the law and legal affairs for the Nagaland state, Toshi Longkumer; and former state president of the BJP’s minority cell, Mukibur Rahman.