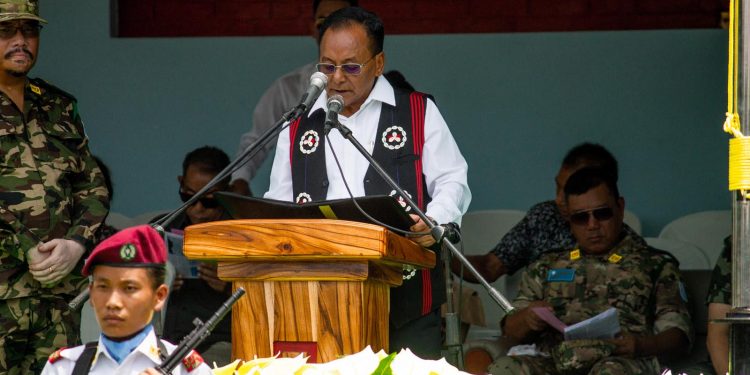 NSCN (IM) on Wednesday said it was appalled at the “unpleasant situations” created by Nagaland police personnel in targetting the doctors in the state during the lockdown period.

The ‘health ministry’ of the outfit, in a statement issued by its kilonser (minister) Dr A. Yanthan, strongly condemned such “mindless violence against the doctors”.

The frontline warriors are the doctors, nurses and other medical staff in the fight against the COVID-19 pandemic across the world, it said.

The outfit said it is utterly shocking and surprising to witness the recent physical assault on Dr Nerozol Sezo in Dimapur on April 3 and Dr Mongshithung Murry in Wokha on April 17 by the state police personnel for “no fault of theirs”.

The outfit expressed deepest sympathy and solidarity with Sezo and Murry as well as the entire medical fraternity over these “unfortunate incidents”.

The statement said the doctors and other medical staff are also humans and they perform their professional duties with unwavering spirit notwithstanding many difficulties and risks involved.

“Thus, the police personnel should deal with the doctors and other medical staff with a sense of humanity and not in a brutish manner,” the outfit said.

It reminded that the state security machinery and personnel that represent the law and order implementing force are to protect all sections of the people and not to take law and order into their hands as per their whims.

“This point ought to be thoroughly understood by every single police personnel on duty,” it said.

The NSCN (IM) in its statement added that at a time when the fight is against the infectious COVID-19, the attack on the frontline workers makes a mockery of the fight against the pandemic.

“It is the bounden duty of the police force to protect the health workers from all unseen forces,” the statement added.

Alleging that the two doctors have become the victims of police high-handedness, the ‘health ministry’ of the outfit appealed to the police personnel on duty to be more humane and professional like the health professionals.

“The health workers are the asset of the Naga society and more so under the present situation when the fight against Covid-19 is enforced on a war footing,” it said.

It said though the police forces are equally part of the society, they should not take the liberty to go overboard in the name of doing their duty.

The outfit said the fight against the pandemic demands cooperation and understanding from each other and support to the frontline warriors.

It added that the government and its work forces are trying their best despite limited resources and logistics in their disposal to combat the virus.

The outfit stressed on adhering to the preventive measures and to follow the protocols laid down by the World Health Organisation (WHO) and the government.