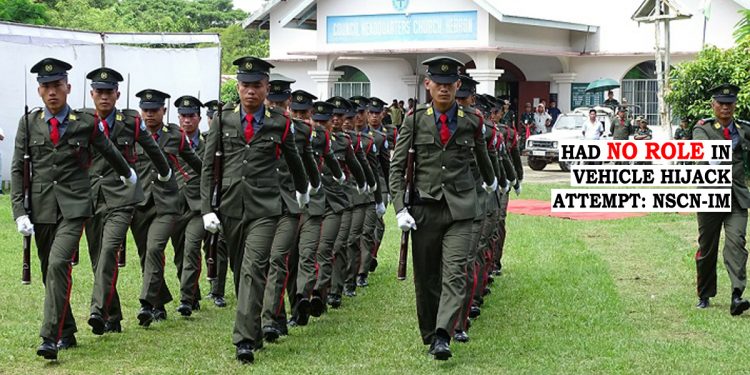 The NSCN-IM has denied its role in the ‘vehicle hijack’ attempt case.

It has claimed that the four cadres of the outfit who were arrested near New Medziphema area along National Highway 29 in Dimapur had no connection with the attempted vehicle hijack on January 8.

The Dimapur Police, on the other hand had said that the four NSCN-IM cadres were arrested for allegedly attempting to hijack an SUV.

Meanwhile, the NSCN-IM stated, “There were dark shadows that loom on NH-29 and those are the people involved in illicit drug and arms business.”

The outfit, quoting its intelligence sources, said one particular party inimical to Naga interest was entering Dimapur with illicit drugs and other illegal items.

It added that the four arrested NSCN-IM cadres were dispatched to identify and deal with them accordingly.

The NSCN-IM further said, “It is a matter of regret that the police developed a misconceived notion that the NSCN members were attempting to hijack the SUV vehicle”.

The NSCN has asked the police to come up with an answer as to “what transpired between them and the SUV occupants by setting the later free after focusing their attention on its cadres”.