NNPGS’ working committee to investigate, monitor and identify those “ringleaders” who were behind the recent blockade at Lahorijan 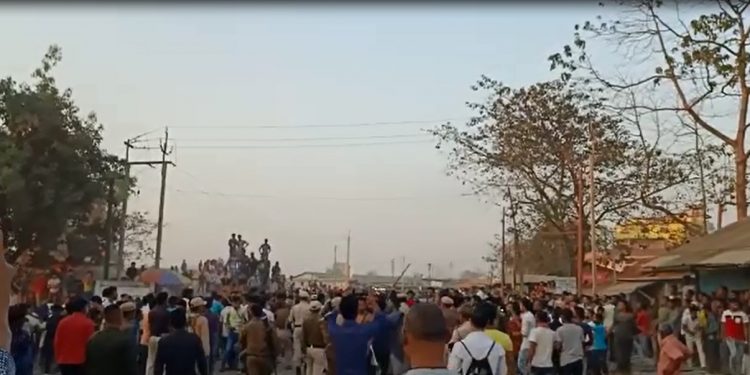 A mob which blocked the Nagas and Nagaland-registered vehicles from going towards Assam at Lahorijan on Sunday. Image credit - Northeast Now

The working committee of the Naga National Political Groups (NNPGs) on Wednesday warned the ‘ringleaders’ who were behind the blocking of the Nagas and Nagaland-registered vehicles from going towards Assam at Lahorijan recently.

The working committee said it would investigate, monitor and identify those “ringleaders” in Dimapur and surrounding areas who are instigating their associates at Lahorijan area in Karbi Anglong district of Assam bordering Nagaland to oppose implementation of inner line permit (ILP) in Dimapur.

The Nagas and the Nagaland-registered vehicles were blocked from going towards Assam at Lahorijan allegedly by a few hundred illegal immigrants on Sunday.

“This is not a positive sign,” the media cell of the committee said.

The committee warned that it will not hesitate to shut down the business outlets of “these members” and said they will be thrown out of “our land”.

“The viral video clips of March 1, 2020 at Nagaland gate are a grim reminder that indigenous people in the NE are being pushed to the corner and therefore appropriate response is required,” it said.

The committee in a statement noted that there was not a single person who resembled a tribal at Lahorijan near Nagaland gate on Sunday.

“To our Assamese people, it is a red flag because the enemy is now outnumbering you and becoming aggressive. The Nagas and the indigenous Assamese people must realise the danger of nursing poisonous reptiles in our kitchen,” it said.

It cautioned all non-tribal people in Nagaland that any opposition to ILP either in words or action will be taken as an affront to Naga people’s aspiration and their long political struggle.

The committee said despite trials and tribulations, the mutual respect and coexistence among Nagas, Dimasas, Karbis, Kacharis and Ahoms have been healthy and positive for centuries.

However, it said, with the unabated influx of illegal immigrants into Assam and Nagaland from Bangladesh in recent times, “our existence as friends and neighbours is being put to test”.

The need to strengthen the age-old bond among indigenous people of Northeast India has become an utmost necessity, it said.

The committee said, “We cannot be at loggerheads because of illegal immigrants.”

Saying that any issue between the Nagas and the Ahoms can be resolved amicably any day, the committee said it met Ahom revolutionary leaders, civil society organisation leaders in recent days and positively shared common concern.

“Let it be known to our neighbours in Assam and other neighbouring people that the Nagas are prepared to partner indigenous peoples in the region to weed out all illegal immigrants, the landless troublemakers, for good,” the committee said.

The committee insisted both the governments in Nagaland and Assam must adopt a common position in these troublesome times that the land along the Nagaland border is swamped by illegal immigrants.

It also said the indigenous communities are becoming subservient to the landless immigrants.

“Ancestral land and indigenous people’s interest must be safeguarded at all cost,” it stressed.