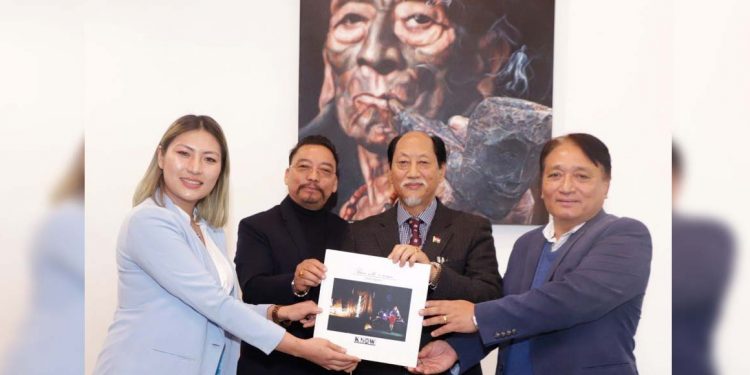 Nagaland chief minister Neiphiu Rio on Saturday said the Nagas are doing well in every field but they lack consistency.

“It is up to an individual what to do and what not to do in life but at the end of the day, one has to give heart and soul on the decision he or she has taken,” Chief minister Neiphiu Rio said while launching the Coffee Table Book at his residential office in Kohima.

The book has been penned by Rita Krocha on the experiences of Onen Nenty during her solo bike tour throughout the 11 districts of Nagaland.

It has been published by Onen Nenty in association with Rattle & Hum Music Society.

Nenty is the first Naga woman to go on a solo bike tour throughout Nagaland.

She has been selected for an all India solo bike tour which will be flagged off by union minister for textiles and women & child development Smriti Irani in New Delhi on March 8.

Neiphiu Rio appreciated Nenty’s bold decision to choose “safety for women” as her slogan not only to promote herself wherever she goes but also for women’s safety.

He wished her the best for her upcoming tour and urged her to promote the unique Naga culture and tradition to the outside world through which tourism in Nagaland can benefit.

Rio told Nenty that she would be a brand ambassador of the state during her tour and urged her to make the state proud.

He assured her that the government would support her in all possible ways.

Advisor to the chief minister, Abu Metha said Nenty’s solo tour was a step towards bringing women empowerment and it exemplified the new energy of the Naga youth.

Nenty expressed her desire to make an impact on society through her passion for biking.

She urged the womenfolk to come out of their comfort zone and think beyond the kitchen.

She also said her passion to ride is indeed a passion with a mission.