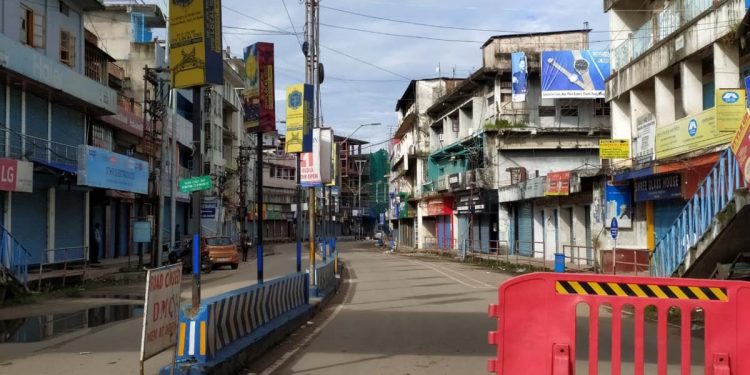 Dimapur town wore a deserted look after 2 pm on Tuesday after strict enforcement of the lockdown by the law enforcing agencies in coordination with the district administration.

Almost all the shops downed their shutters by 2 pm and a few pedestrians were noticed on the streets.

Shops and other business establishments are allowed to open from 9 am to 2 pm in the district.

The Dimapur district task force at a meeting at the deputy commissioner’s office on Monday called for more stringent implementation of lockdown rules in view of the present Covid-19 situation.

As of Monday, the number of COVID19 positive cases in Nagaland has crossed 1,000-mark.

Accordingly, under the direction of Dimapur commissioner of police Rothihu Tetseo, traffic barricades were installed at major traffic intersections in the town after 2 pm on Tuesday.

Tetseo said unnecessary movement in the streets, bikers, cycling, movement of non-essential traffic will not be allowed after 2 pm, except those who are under the exempted category.

He said the violators would be penalized.

Dimapur deputy commissioner Anoop Kinchi also said the public movement would not be allowed after 2pm.

He warned that defaulters would be punished under the Disaster Management Act 2005.

Tetseo directed the shopkeepers to strictly maintain the timing for opening and closing of their shops as per laid down guidelines.

The Dimapur district administration and police appealed for public cooperation in fighting the pandemic collectively.