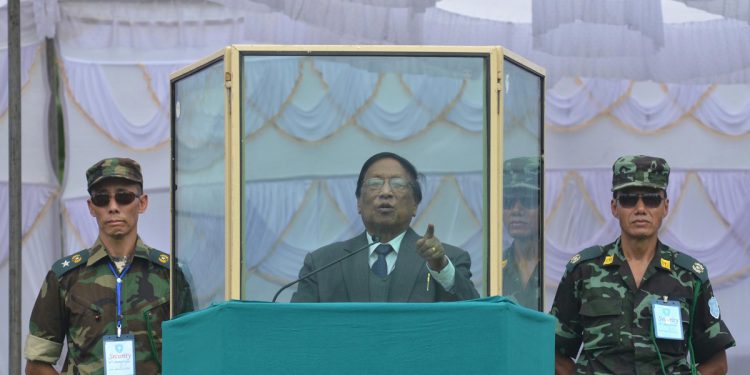 “Opposing the Naga tax is nothing short of obstructing the Naga political movement and to let the Naga people be enslaved by India,” the NSCN (IM) said in a release.

It said as per the Framework Agreement, the Nagas are the masters of their own lands both below and above.

“So, why should India interfere in the internal matter of the sovereign Naga people?” it asked.

The outfit issued the release in response to Nagaland Governor and interlocutor for Naga talks RN Ravi’s statement on June 21 that the Indian government does not recognize collection of tax by any other entity other than by it or a state government.

“Taxation is a sovereign function which can be exercised either by the Indian government or the state government,” Ravi said.

He said forcible collection of money by any entity is extortion, which is a criminal offence punishable under the laws.

It sought to point out that taxation is something, which is deeply rooted in the history of the Naga resistance movement even before the Naga National Council (NNC) came into the scene.

The release said the NSCN collected taxes to support the Naga people’s political movement, which had started in 1929 even before India attained independence from the British.

The outfit claimed itself to be a genuine political group and a government of the people with total commitment to find an honourable political settlement and it should not be treated at par with other outfits that have different objectives.

“The irony is that while other outfits are taxing the people as agents of adversaries that are remotely connected with the Naga political interest,” the NSCN(IM) said.

“The matter remains loud and clear that at no point of time the Nagas became Indians either by conquest or consent,” it stated.

It said during the course of the Indo-Naga political talks, passing through the hands of three interlocutors, this taxation right was acknowledged indicating that the outfit has the right to tax to carry on its movement.

Following the signing of the Framework Agreement on August 3, 2015, this taxation was included in the competencies.