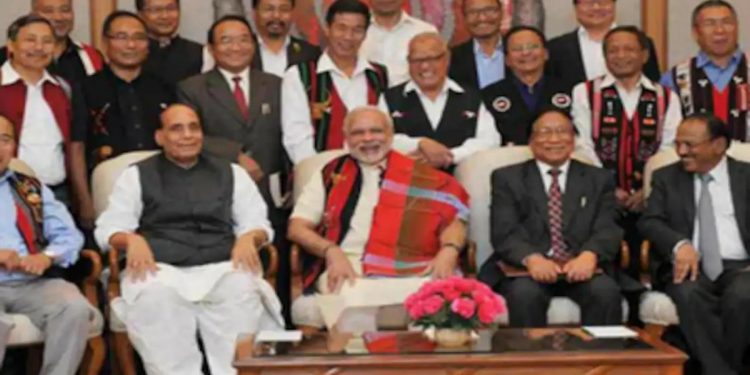 A delegation of the Naga Hoho, the apex body of Nagaland, on Wednesday urged the Centre for an early conclusion of the ongoing peace process with the NSCN-IM and find a solution to the decades-old violent movement in Nagaland.

According to sources, a nine-member team of the Naga Hoho met DoNER minister Jitendra Singh and apprised him about the slow progress of the peace negotiations between the NSCN-IM and the Central Government’s representative.

The Naga Hoho conveyed to Singh that all principles and framework agreed upon must be respected and not changed unilaterally, sources said.

The Nagas desire the earliest clarification on the progress and position of this framework agreement from the government of India, the team is learnt to have told the minister.

The framework agreement was signed on August 3, 2015, by NSCN-IM general secretary Thuingaleng Muivah and interlocutor and present Nagaland Governor RN Ravi in the presence of Prime Minister Narendra Modi to hammer out a final solution.

The NSCN-IM on Thursday came down heavily on interlocutor Ravi, alleging that he was involved in a ‘mischief’ and he has become a ‘liability’.

In a statement, the Naga militant group had said that the Central Government should appoint a new interlocutor to carry forward the peace negotiations. The NSCN-IM leadership is currently is Delhi and held two rounds of official level discussions in last few days.

In October last year, Ravi had ruled out a separate flag and Constitution for the Nagas as demanded by the NSCN-IM and made it clear that the ‘endless negotiations with the insurgent group under the shadow of guns is not acceptable’.

Ravi had said the NSCN-IM has ‘mischievously’ dragged in the Framework Agreement and began imputing imaginary contents to it.

The framework agreement came after over 80 rounds of negotiations spanning 18 years, with the first breakthrough made in 1997 when the ceasefire agreement was sealed after decades of insurgency in Nagaland which started soon after India’s independence in 1947.