Glaring and shameful act of political highhandedness in Nagaland

NDPP legislator and former vice president of Naga People’s Front (NPF) Central R Khing has shown a shameful example of ‘political might is right’ as he demanded ‘punishment’ of a government official.

Khing, who had resigned from both primary and active membership of the NPF and joined the Nationalist Democratic Progressive Party (NDPP) in January this year, asked for transfer of a Nagaland government employee to a ‘remote area’ as punishment.

In an act viewed as utter misuse of official power, R Khing as the Advisor of Animal Husbandry and Veterinary Services and Women Resource Development asked the Advisor of Economics and Statistics to take disciplinary action against a government official for his alleged involved in the election process during the last Assembly elections.

In an official letter, dated June 11, 2018, R Khing had asked the Advisor of Economics and Statistics, Government of Nagaland to take disciplinary action against a government official for his alleged involved in the election process during the last general elections.

In the letter, R Khing mentioned that a government servant, Khiyalo Kez, who was serving as statistical assistant at Wokha had ‘willfully involved himself in the recently concluded general election’. 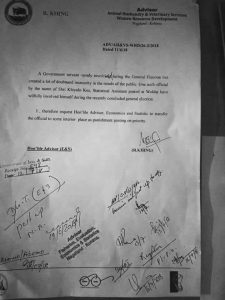 In the letter, R Khing had requested the Advisor of Economics and Statistics Department to transfer the official ‘to some interior place as punishment posting on priority’.

R Khing also stated in the letter that the concerned government official’s involvement in the election process had created a lot ‘doubt and insecurity’ in the minds of the public.

He began his political career with the Janata Dal-United (JD-U) in 2003 and continued a brief stint before joining NPF in the same year.

He had been a loyalist of the NPF till 2018 when he joined the Neiphiu Rio led NDPP before the Assembly elections.