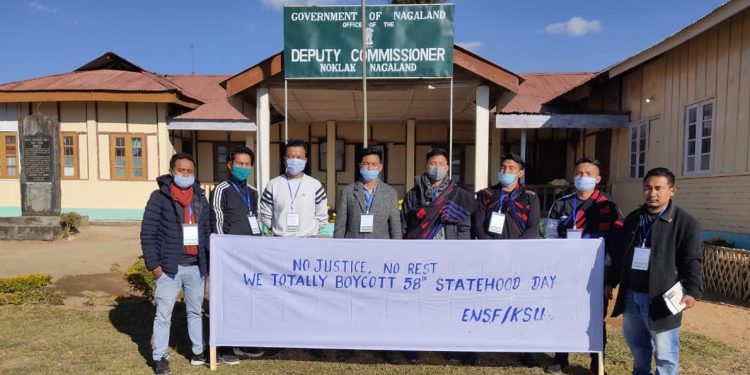 The meeting between the Eastern Naga Students’ Federation (ENSF) and Nagaland Chief Minister Nephiu Rio held on Tuesday at the CM’s residential complex ended on an inconclusive note.

As the meeting remained inconclusive, the ENSF decided to continue their agitation in entire eastern Nagaland until the demands are fulfilled.

However, Sangtam said the meeting could not come to a logical conclusion as Chief Minister Rio said that cabinet’s approval is needed to address the charter of demands put forth by the ENSF.

On November 26, the ENSF, in an ultimatum, announced to launch an indefinite agitation against the state government for not fulfilling its demands related to the Nagaland Staff Selection Board (NSSB) and non-implementation of personnel and administrative reforms by the Nagaland Public Service Commission (NPSC).

Meanwhile, the second day of the second phase of agitation called by the ENSF to press for its demands passed off peacefully on Tuesday.

On the second day of the agitation, the six federating units of the ENSF boycotted the Statehood Day celebration, locked down government offices and restricted movement of government registered vehicles at their respective headquarters.

ENSF President Sepili L Sangtam said that a government vehicle was seized on Tuesday for “not respecting the directives issued by the federation.”

According to reports, 11 government vehicles were seized on the first day of the agitation on Monday.

Sangtam said the seized vehicles will be released only when the demands of the federation are fulfilled.