A disciplined bowling attack by Rachit Bhatia helped Nagaland to restrict Bihar to 150 runs in their Plate Group Ranji Trophy encounter at Moin-ul-Haq Stadium in Patna on Saturday.

Bhatia took six wickets in his 16.1 overs giving away just 44 runs at a spectacular economy rate of just 2.72 runs. 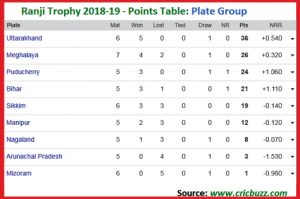 Earlier, playing their sixth Ranji match, Nagaland won the toss and opted to field which proved to be a wise decision as the team’s bowlers managed to scalp their opponent’ wickets at regular intervals.

At one stage, Bihar was tottering at 89/9, but they were rescued by the tailenders, who gave a tough fight.

Harsh Singh, the number 10 batsman on Bihar’s roster was the highest scorer with a respectable unbeaten 48 runs. He was followed by Samar Quadri, the ninth batsman who scored 20 runs.

The partnership resulted in crucial 61 runs, before it finally ended at 46.1 over when Bhatia took Quadri’s wicket.

In reply, Nagaland too lost some early wickets, and are hovering at 61/3 at the end of third session.

In the last session, they were more in control losing just one wicket in the process. At stumps on Day-1, Nagaland were 101/4, trailing Bihar by 49 runs.

The team captain Rongsen Jonathan was batting at 18 with Imliwati Lemtur on the other end on four runs.

Earlier, Hokaito Zhimomi, Paras Sehrawat and Abrar Kazi made 21, 27, and 28 respectively for Nagaland.

Out of the five matches so far, Nagaland has won one, played another for a draw and lost the other three matches.