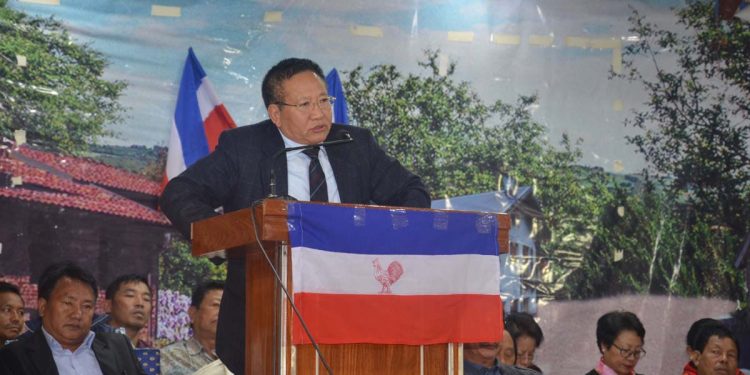 The dignity of the Nagaland Legislative Assembly and its democratic principles cannot continue to be abused by the present-day government, Opposition leader TR Zeliang said on Saturday.

Zeliang said this in the context of the decision to hold the ensuing 6th session of the 13th Nagaland Legislative Assembly for only one day on August 13.

In a letter to governor RN Ravi, Opposition leader Zeliang said the present-day government cannot continue to make democratic practices a mockery on the pretext of implementing COVID19 measures.

The session, which was earlier scheduled to be held on July 30, has been deferred to August 13 because of certain unforeseen developments, commissioner and secretary, Nagaland Assembly, Dr P.J. Antony said in a notification on July 29.

Zeliang maintained that the date of commencement and the number of days for Assembly sessions should be chosen at the convenience of the Speaker and the Leader of the House.

However, the same privilege cannot act as a license for either the Speaker or the Leader of the House to construe duration of Assembly sessions according to their personal suitability, he said.

“As is evident, the culpability of holding a one-day session has been shifted to the Raj Bhavan by releasing the Bulletin Part-II vide No.AS/LEG-36/2020 on the night of July 29, 2020, by the Assembly Secretariat,” Zeliang said.

Quoting the bulletin, Zeliang said the governor’s direction for postponement of the session “indicated” August 13 which implies that the 6th session of the Assembly will be a one-day session as most of the MLAs will move to various administrative headquarters on August 14 for hoisting the National Flag on the Independence Day.

The Opposition leader brought to the attention of the governor the issues which need discussion in the Assembly.

Zeliang said as per his understanding, the Naga political issue has arrived at a crucial stage and concerned stakeholders, particularly the Nagaland Legislative Assembly, need to generate space for deliberation on the matter.

He pointed out that during his tenure as the chief minister, the Naga political issue was discussed for two consecutive days in the Assembly on July 23-24 in 2015.

“More than ever, the issue has grown more significant today and the same ought to find room for discussion on the floor of the Assembly,” he added.

He also said it is only appropriate for the Assembly to set aside enough time for discussion on the COVID19 pandemic which has witnessed 1693 positive cases and 6 deaths as of Saturday.

Furthermore, he said deliberation on the Securitisation and Reconstruction of Financial Assets and Enforcement of Securities Interest Act, 2002, also known as the SARFAESI Act, 2002, is equally important.

The Assembly cannot continue to ignore the matter unlike during the 5th session when the matter was dismissed from being discussed even after it was finalised by the business advisory committee.

Zeliang demanded that the Assembly session should be extended to three days for one-day discussion on each of these three issues of public importance.

He urged the governor to issue necessary direction either to convene the session from August 11-13 for three days or to differ the commencement date of the session to a day after August 15 in order to accommodate at least three days for the session.

He also suggested commencement of the session on August 13 as scheduled and adjournment of the House without sine die and resume it post recess for another two days after August 15.

Zeliang also brought to the notice of the Governor that he had proposed to the Speaker for extension of the session vide D.O letter No. LO/CORR/SPKR-2020 on July 25, 2020, but it went unattended.