Constitution of India has ‘collapsed’ in Nagaland: State Congress 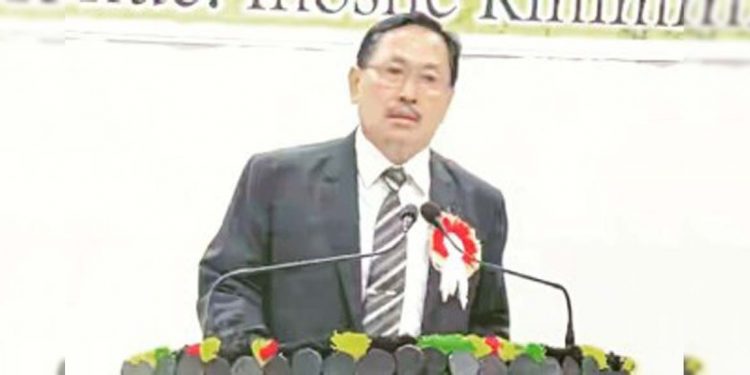 In a hard-hitting statement, Nagaland Congress president K Therie on Friday said the Constitution of India has “collapsed” in Nagaland, which the Government of India is aware of.

Nagaland Pradesh Congress Committee (NPCC) president Therie alleged that the existence of the state government and the Constitution is no more there except for siphoning off the state budget.

He said the people have lost security to life and property while the prices of essential commodities are soaring sky high.

The Nagaland Congress chief sought to point out that the State Assembly is convened for 15 minutes and adjourned sine die to fulfil the obligation under the Constitution of India to allow flow of funds from the Government of India with “intent to loot”.

“It is not a new thing to the people neither to the Government of India,” the statement said.

He said the Nagaland government is a subordinate government to various factions including those from Assam.

Therie alleged that after the then Democratic Alliance of Nagaland-I government adopted its policy to facilitate and support the ongoing peace process in the State Assembly on August 19, 2005, the ministers, administration and police started directing the aggrieved public, entrepreneurs and village authorities to compromise with the extortionists, kidnappers and murderers in the interests of “future safety”.

Saying that 24% of the government employees’ salaries are deducted at source and given away, the NPCC chief said all the drawing and disbursing officers (DDOs) start deducting at source from all the bills in the name of insurgents’ tax and then share.

He stated that it is not only the Covid19 fund but sharing of development funds is now systemised and everyone in the government also gets benefit. He added that the funds released are known by the insurgents before the beneficiaries.

Alleging that the “commission margin” has increased, Therie, quoting AG reports, said many of the projects remain unverifiable although the funds are drawn.

He alleged that the larger chunk is taken by ministers, MLAs and the government employees involved in the development bills.

Therie said the insurgents not only collect “commission” from the DDOs but also from the contractors and suppliers.

The entire budget vanishes into thin air in Kohima and it does not percolate down to the districts anymore, he added.

Therie also said it is incorrect to say that “historically taxation is something deeply rooted in the history of Naga resistance movement even before the Naga National Council came into the scene”.

“This is total distortion of history,” he stated.

According to him, it is the State Government that does not want solution to the Naga issue.

“It is they who want to continue in the chair and promote insurgency, prolong and delay solution. If they want, they can pave the way by resigning. The Government of India will implement the solution immediately,” he said.

Therie termed Governor RN Ravi’s reaction to the NSCN (IM)’s statement on ‘tax’ as right under the Constitution of India.

He said tax is a sovereign right and not even a single paisa can be levied without having been passed in the State Assembly or Parliament.

He wanted that Nagaland chief minister Neiphiu Rio make his stand clear on whether collection of so-called tax by Naga national workers is legal and right as they claim or not.

Therie asked why should the Government of India not dissolve the state government for failing to enforce the law of the land and breakdown of law and order. Why should a constitutional government be allowed to facilitate the insurgents in extortion, he questioned.

Therie further asked why should the Government of India take shelter under recent elections in five states or Covid19 phase – I or II to delay implementation of Naga solution when the talks are over.