Nagaland is a small State which is dependent on the Centre, says Neiphiu Rio 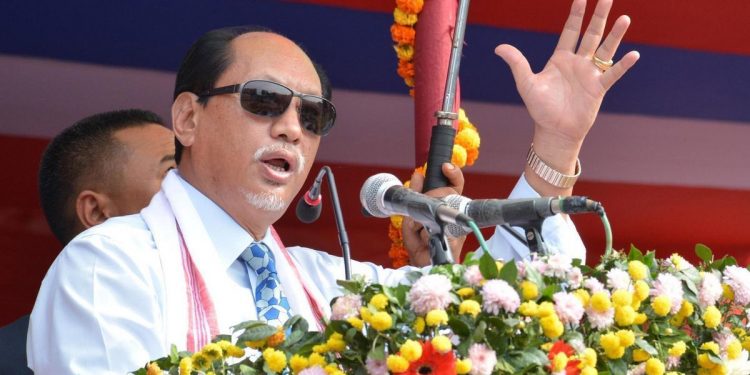 Nagaland chief minister Neiphiu Rio called upon the people of the state to vote consciously for the PDA consensus candidate and sitting MP Lok Sabha Tokheho Yepthomi in the April 11 election and exuded confidence that the BJP-led NDA government will return to power.

Rio said even opinion polls were showing favourable outcome for the National Democratic Alliance (NDA) at the Centre.

Addressing public rallies at Noklak and Thonoknyu on Saturday, the Nagaland chief minister, however, said it is for the people to decide whether they want to elect an MP who can convey the voice of the people in the Lok Sabha in line with the government’s ideologies and objectives in coordination with the state government, or whether they want an MP from the opposition who will not coordinate with the state government and instead sit in the opposition benches in Parliament, NDPP media & communication committee said in a release.

The public knows better which choice is more pragmatic and workable for the people of the State, he said.

Rio said Nagaland is a small State which is dependent on the Centre and added it will only be in the fitness of things if the state government and the central government are in an alliance.

According to him, an atmosphere for peace and development would be all the easier if the people elect the PDA candidate so as to be in the NDA in Delhi.

“It is to this effect that alliance was maintained with the BJP since 2003 till date,” he said.

Rio expressed his appreciation and gratitude to the BJP national leadership for reposing their faith in his leadership and entering into a pre-poll alliance with the NDPP.

He said the BJP snapped ties with the NPF as the BJP had lost faith in the leadership of former chief minister T.R. Zeliang and the NPF party.

Rio accused the NPF of resorting to lies of lies and deceit in an attempt to woo the BJP with propositions of merger and taking over the government.

He said the State BJP had issued a press statement in the local papers on Saturday saying it entered into a pre-poll alliance with the NDPP and would continue to uphold the spirit and unity of the alliance.

He also accused the NPF leadership of being in the habit of misleading people through lies. He cited instances like T. R. Zeliang’s false claims of being a graduate, the claims that the NDPP will be derecognised by the Election Commission of India and all NDPP MLAs will stand disqualified after which NPF will form the government.

The chief minister said the NPF’s failure to set up a candidate to the Lok Sabha and instead support the Congress candidate is a mockery since NPF has 26 MLAs while the Congress does not have a single MLA and had also lost the last three general elections in the state.

This had demoralised the NPF MLAs and party workers and severe in-fighting had cropped within their ranks, he added.

Rio also said the two NPP MLAs, Imnatiba and L. Khumo, had also cautioned the NPP not to set up candidates as it will be against the spirit of the PDA which had put up consensus candidates.

The two NPP MLAs had made their stand clear on the party platform that if the NPP sets up candidates then they will have no choice but to take counter-measures in order to maintain the spirit and preserve the unity of the Alliance.