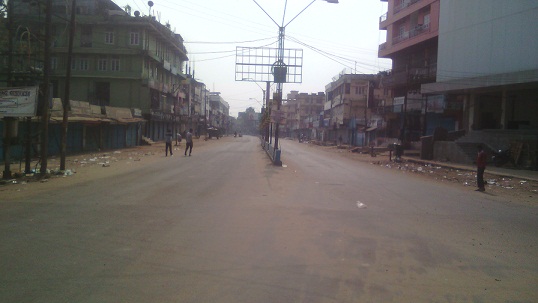 A deserted street in Dimapur during dawn-to-dusk bandh on February 1.

Division among Nagas over ‘Solution before Election’ has come to the fore on Thursday as the dawn-to-dusk Nagaland bandh called by CCNTHCO evokes mixed response in the state. The bandh was total in four out of twelve districts of the state. There was no impact of bandh in Kohima.

That the Nagas are not united when it comes to ‘Solution before Election’ was out in the open on Thursday. Even in Dimapur town where the bandh was total, not a single volunteer nor a member of public was seen enforcing the bandh, indicating that the bandh call did not have the mass support.

Elsewhere in the state, the bandh was effective only in three other districts that included Peren, Zunheboto and Mokokchung. There was no report of any untoward incident during the period of the bandh in these districts.

Nevertheless, president of Naga Council Dimapur T Bangerloba termed the Nagaland bandh successful and peculiar. He called the dawn-to-dusk bandh peculiar because it was enforced without any volunteers and successful because it was called to support the core issue of all issues – the Naga political issue.

The Naga Council on Wednesday issued a statement asking its affiliated organisations to bring at least 100 participants each for a “showcase programme” at Dimapur DC Court junction at 1 pm on Thursday. Interestingly, none turned up for the programme leaving the organisers red faced.

The Naga Council president said it was not its decision but the decision of the Core Committee of Nagaland Tribal Hohos and Civil Organisations (CCNTHCO) on January 29 to impose the Nagaland bandh to protest against the issue of election notification for the Assembly election.

Nagaland Chief Secretary on Wednesday issued a gazette notification for the February 27 state Assembly election. The committee has demanded solution to the Naga issue before the election and deferment of the poll till such time.

When asked what would be their plan of action in the event of any candidate filing nomination, Bangerloba said the CCNTHCO will sit together in a day or two and decide on it.

After holding a meeting, the APO, in a statement, said it had decided not to persuade nor dissuade any individual from filing nomination and also not to boycott the forthcoming election. Therefore, it said, no bandh would be allowed in Angami-inhabited areas. It also directed the public not to participate in the bandh.

However, the Angami Youth Organization had extended supported to the bandh.

The Chakhesang Public Organisation (CPO) at a general meeting at Pfutsero on Wednesday resolved not to boycott the upcoming Assembly election and not to support today’s bandh. It also resolved to give full support for early Naga political solution.

The Lotha Hoho also decided not to participate in the bandh.

The ENPO said it decided not to impose the bandh in good faith and not to create unnecessary inconvenience to the public of ENPO areas. However, that does not mean that it does not support Naga solution, the ENPO said. The ENPO areas cover five districts of Tuensang, Mon, Longleng, Kiphire and Noklak.