The arrival of ‘Longleng’, one of the Amur falcons which were satellite tagged by the Wildlife Institute of India (WII) in 2016, to Nagaland has cheered up the wildlife activists and bird lovers of the state.

Longleng has arrived the Northeast India and is expected to reach its roosting site in Nagaland soon.

Longleng, a female Amur falcon satellite tagged in October 2016 from the roost site in Yaongyimchen Community Reserve in Longleng district is the only falcon that is currently being tracked.

Longleng started on its migration from Somalia to India on April 29 this year and made a four-day non-stop flight over the Arabian sea skirting the coastline of the Arabian Peninsula and then flew along the coast of Gujarat and enter India over Surat town. 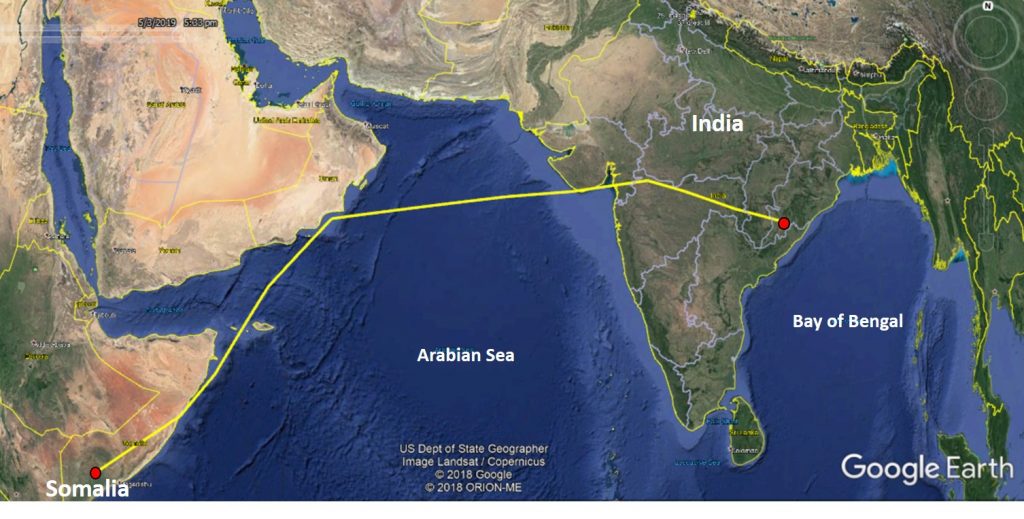 The Amur Falcons are the long-distance migrants pass through India on their return northbound migration from Southern Africa en-route to their breeding grounds in northern China and eastern Mongolia.

On May 2, Longleng made its first stop in a forested tract in the Gadchiroli Forest Reserve in eastern Maharashtra covering a distance of close to 4800 km.

“On May 5 this year, we tracked Longleng in Manipur from where it entered Myanmar,” said Suresh Kumar, senior scientist of the Dehradun based Wildlife Institute of India (WII).

Kumar along with his team has been tracking Longleng since 2016.

“It is quite fascinating to learn the Longleng is back into the Northeast region. However, the information that Longleng is back in May also indicates that our knowledge about the migratory birds are not sufficient, there is so much more to research about them.

“Earlier we knew that the migratory birds come only in October –November. The Earli arrival could due to various reasons—may be availability of food here or may be due to rise of temperature in other parts or may be due other climatic reasons,” said Nagaland based journalist and activist Bano Haralu.

Haralu is one of the pioneer activists of Nagaland who took up the cause of conserving the Amur falcons in 2012 through engaging the community members.

“The visit of Longleng brings happiness to us. The Amur falcons roosting here is one of the most beautiful success stories of conservation in the world and it is the local people who have made it successful since 2012 by taking an oath not to hunt the birds,” said Y Nuklu Phom, a local who is spearheading the Community work and was specially instrumental in the satellite tagging of Longleng.

During the two years of tracking since 2016 on its return from Africa Longleng on entering the Maharashtra coastline flown down to southern Karnataka close to Bangalore or Mysore and after few days of stop-over head back along the east coast to Northeast India and then beyond.

However, interestingly Longleng this year headed straight across Maharashtra and almost straight in the direction of cyclone Fani that was moving up along the Bay of Bengal coast.

“Amur falcons make non-stop flights of three to five days or may be more. Longleng’s arrival in India now marks the sixth successful crossing of the Arabian Sea and is expected to arrive in the next few days in Nagaland once again,” Dr Kumar said.