The Nagaland Gaon Burha Federation (NGBF) on Wednesday urged governor P B Acharya to take up the issue of officially inviting the NSCN (Khaplang) led by Khango Konyak with the centre for peace talks at the earliest. 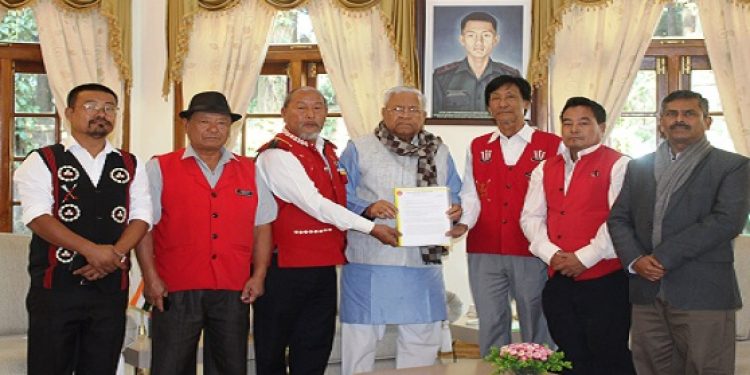 The Nagaland Gaon Burha Federation (NGBF) on Wednesday urged governor P B Acharya to take up the issue of officially inviting the NSCN (Khaplang) led by Khango Konyak with the centre for peace talks at the earliest.

The federation, led by its president Shahlem Konyak, called on the governor at Raj Bhavan in Kohima and submitted a representation, making the appeal.

The Khango-led group officially endorsed the NGBF to act as a mediator with the government of India for resuming the ceasefire during a meeting at Yankhao village in Mon district of Nagaland on October 25 at the earliest.

Following the mediation by the NGBF, the centre and the Khango-led group reportedly agreed to begin the process of negotiation.

The governor lauded the gaon burhas for their efforts towards creating a peaceful atmosphere in the state and contributing towards nation-building.

Acharya said the gaon burhas have been playing a vital role in the governance of the state, thus becoming an essential component of the state government.

Stating that the gaon burhas were the key people behind building their villages, he called upon them to be agents of informing the targeted people about the various central and state government welfare schemes and programmes. This will bring development and progress to the society, he added.

The governor also exhorted the federation to continue its tireless work for creating a peaceful atmosphere in the state, saying peace was the need of the hour.

Acharya further stated that the peace process was moving in the right direction and hoped that a settlement will be reached at the earliest.

He also expressed his appreciation to the Naga Mothers Association for their role in promoting peace and harmony in the state.

The NGBF also appealed to the centre to promptly respond to the peace offer and resume talks as soon as possible after Khango faction had accepted the conditions set by the centre for resuming the ceasefire. It also urged all Naga political groups to unite and join the peace process for an early solution to the Naga issue.

The centre, however, said it was committed to solving the Naga issue with one comprehensive solution and therefore cannot have many agreements.