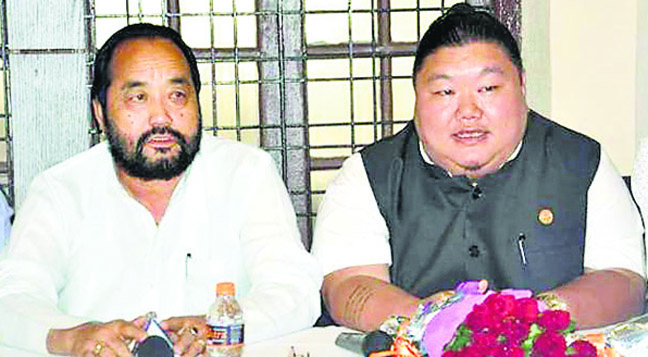 The BJP Legislature Party (BLP) in Nagaland hoped that the new dispensation at the Centre would keep its commitment to protect the interest and identity of the Northeast people in general and Nagaland in particular.

The state BJP legislators, led by deputy chief minister and BLP leader Y. Patton, also hoped that the ongoing Naga peace talks would be expedited so as to arrive at a final solution that is acceptable and honourable.

The legislators believe that Prime Minister Narendra Modi’s vision for Sabka Sath SabKa Vikas, Sabka Vishwas would be strengthened and more developmental projects would taken up for Nagaland, said a statement issued by the media cell of deputy CM’s office on Saturday.

Patton and state BJP president Temjen Imna Along expressed gratitude on behalf of all BJP legislators and karyakartas of Nagaland for inviting them to attend the historic swearing-in ceremony of the Prime Minister and his council of ministers.

Congratulating Modi and his new council of ministers, the MLAs also thanked the central leadership for inducting two MPs from the Northeast in the union ministry.

Nagaland chief minister Neiphiu Rio also congratulated Modi on being sworn in as the Prime Minister for the second consecutive time.

“The people of India have given the BJP-led NDA, under your leadership, an overwhelming mandate and I am confident that under your visionary leadership, the country will scale greater heights,” Rio said in his message to Modi.

Congratulating Modi and his new council of ministers, Rio assured fullest support and cooperation to him in achieving our common goals of nation-building and improving the welfare of the citizens of India.

The ruling NDPP-led People’s Democratic Alliance government said it looked forward to the world’s largest democracy evolving into a recognised power in the international arena under the dynamic leadership of the Prime Minister on the foundation of a “secular, democratic, republic” which made India a great nation.

The ruling alliance also assured Modi of its total support towards realising genuine peace through a political solution of the Naga issue that is honourable and acceptable to the people.