Quick reaction teams, mobile and static security squads, among other multi-tier security arrangements have been put in place across six districts 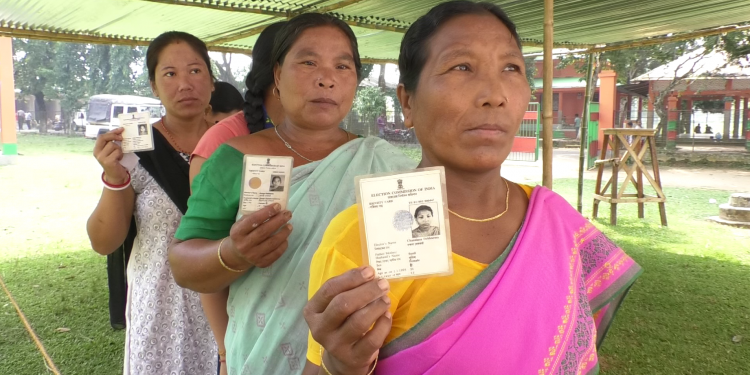 Woman voters waiting in a queue to cast their votes in a polling booth in Tripura. File image: Northeast Now

With the deployment of an unprecedented number of para-military and state armed forces troopers, a multi-tier security cover is in place for the deferred polls to the Tripura East Lok Sabha constituency on Tuesday.

“Central Para-Military Forces (CPMF) and Tripura State Rifles (TSR) troopers would be deployed in over 88 per cent of the 1,645 polling booths in 1,349 locations spread across the Tripura East Lok Sabha seat,” DGP Akhil Kumar Shukla told the media.

He said that quick reaction teams, mobile and static security squads, among other multi-tier security arrangements have been put in place across six districts.

The central forces include the BSF, the Assam Rifles, the ITBP and the CRPF.

According to a senior police official, around 10,000 CPMF and TSR troopers and state police personnel are already posted in the entire mountainous Tripura East Lok Sabha constituency, reserved for the tribals.

Security has been tightened along Tripura’s borders with Bangladesh (856 km), Mizoram (109 km) and Assam (53 km) to prevent cross border movement of people during the voting.

The CEO had earlier said that all polling agents, candidates and, if necessary, 1,257,944 voters that include 620,291 women, would be provided security to facilitate free and fair polling.

Taranikanti said restrictions on the movement of private vehicles and political activists in and around the polling stations would be implemented strictly.

Tripura has two Lok Sabha constituencies. Polling in the Tripura West seat was held on April 11.

There are 10 contestants, including two women, in the Tripura East seat. But the three main contenders are CPI-M sitting MP Jitendra Choudhury, BJP’s Rebati Tripura and Maharaj Kumari Pragya Deb Barman from the Congress.

Since 1952, the Left parties have won the Tripura East seat 12 times and the Congress four times.

Tripura, which has traditionally witnessed a direct or triangular contest, will for the first time see a multi-cornered battle in the constituency as the BJP has emerged as a potent political force after the 2018 Assembly polls.