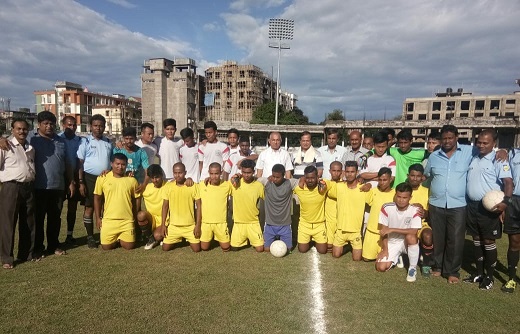 PWD team now would be relegated to the first division level as conducted by DSA’s football branch.

Speaking to Northeast Now, football secretary of DSA Silchar, Bikash Das said, “This is Mridul Hore Memorial prize money knockout tournament. PWD not playing in this tournament would result the same fate what Public Heath Engineering (PHE) did by slowly phasing out in the following football season by 2015-16 and now has no team.”

Silchar DSA president is though upbeat to revive the craze of football back in Silchar. Speaking to Northeast Now, Babul Hore said, “We once boasted of players as once more than half of the Assam football team belonged to Silchar or Barak Valley. Nonetheless, we are pushing hard to bring back local players to take to the field to regain our lost glory.”

The winners of this tournament would get prize money of Rs 5,000 and a trophy, while, the runners would get a sum of Rs 3000 plus a trophy.

Itkhola Sporting Club’s secretary Bijendra Prasad Singh was humble to take it in his stride for this club after winning the first division league this year, entered into super division Mridul Hore knock out trophy, but lost in the first match and now out of this tournament.

Bijendra Prasad Singh said, “The way the football team was formed in a short notice is appreciable for which I have no complaints. They tried their best, but the better team won.”