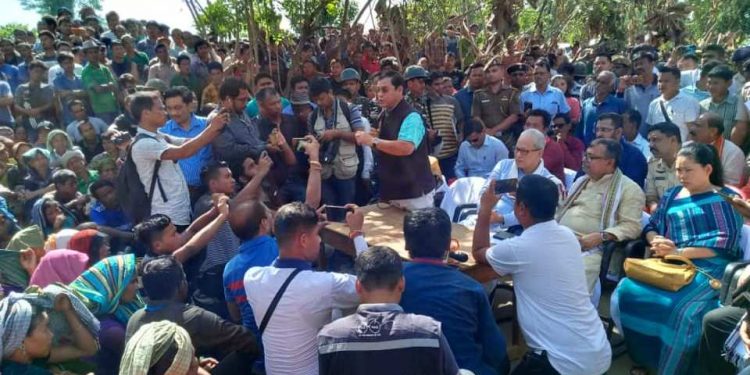 Bru refugees living in relief camps in Tripura have withdrawn the road blockade following a meeting with a team of ministers of the Tripura government.

The agitators lifted the blockade on eighth day on Thursday after Tripura government announced that it would provide ration to the refugees till November 30.

Despite the imposition of prohibitory orders under Section 144 CrPC, Bru refugees had continued their blockade since October 31 at Dasda-Anandabazaar area in Tripura’s North district.

Sources said a team of ministers led by Tripura deputy chief Jishnu Dev Varma met the leaders of the Bru organisations on Thursday and convinced them to lift the blockade.

Deputy chief minister Varma said that the government will provide ration till November 30 this year.

He also urged to the refugees to come to Agartala and sort out their problems thorough talks with the government officials.

Varma said that the Tripura government will talk to central government and Mizoram government in this regards.

Sources confirmed that the state government will start providing rations to the refugees from Friday.

The leaders of Congress party also met the agitators on Thursday.

The Mizoram Bru Displaced People’s Forum (MBDPF) had claimed on Monday that six people including babies have died in relief camps since October 29 “because of starvation” after the Centre stopped the supply of ration and cash dole to the 35,000 odd refugees for October.

At least 32,000 people of ‘Bru’ community had fled Mizoram due to alleged ethnic persecution and have been living in six relief camps in Tripura for the past 22 years.

The Tripura government suspended ration supplies in the camps from October 1 after the refuges declined to return as per repatriation treaty signed in 2018.

They continued their protests for an immediate resumption of food supplies.