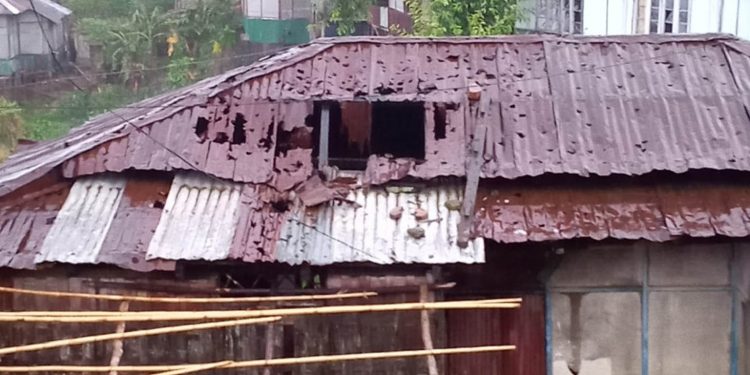 At least 268 houses were damaged by massive hailstones in Hliappui village in east Mizoram’s Saitual district near Manipur border, an official said on Friday.

The official said that the incident occurred around 4 pm on Thursday when the village was hit by heavy rain accompanied by the hailstorm.

At least 189 dwelling houses have been completely damaged and 79 others partially damaged by hailstones, which were the size of eggs, he said.

He said that one person sustained injuries and one cow and two poultry were killed in the incident.

Hliappui is a village in the newly created Saitual district housing 382 houses. It is located about 35 km from the district headquarter Saitual and 142 km from the state capital. It falls under Lengteng assembly constituency.

Most of the residents are engaged in Agriculture.

The district administration and the local MLA L. Lalthangmawia were extending relief to the villages by providing financial assistance, tarpaulins and bundles of tin sheets to the villagers.

Officials of the district administration said that the Mizoram Presbyterian Church of India and the state rural development department have decided to provide 200 and 100 bundles each of tin sheets to the victim families.

They said that the village has also received financial assistance to the tune of Rs 2 lakh from public contribution and other relief from various sources.

Residents of the village and about 450 volunteers from more than 14 neighbouring villages gathered for community service to repair the damaged houses on Friday, official sources said.

The sources added that about 50 houses, which were completely damaged by hailstones, were repaired on Friday.

Earlier on April 18, nearly 200 houses were damaged in several villages across the state when heavy rain accompanied by gusty wind hit the hilly northeastern state.