PETA awards tender-hearted Derek from Mizoram for act of compassion

Recognising his heart-warming act of trying to save the little chick he accidently run over, PETA has honoured him with ‘Compassionate Kid Award’

Six-year-old Derek C Lalchhanhima from Sairang, Mizoram who won millions of  hearts across the nation has also drawn the attention and compassion of global Animals rights giant PETA (People for the Ethical Treatment of Animals) who has conferred the Compassionate Kid Award on the child.

The story of the little boy who accidentally ran over his neighbour’s chick and then rushed the bird to the nearest hospital with Rs 10 in his pocket went viral across the internet due to the boy’s innocent demonstration of pure compassion and love for all living forms.

PETA India has rightfully recognized this and decided to reward and encourage him for his priceless act by giving him the organisation’s ‘Compassionate Kid Award’. 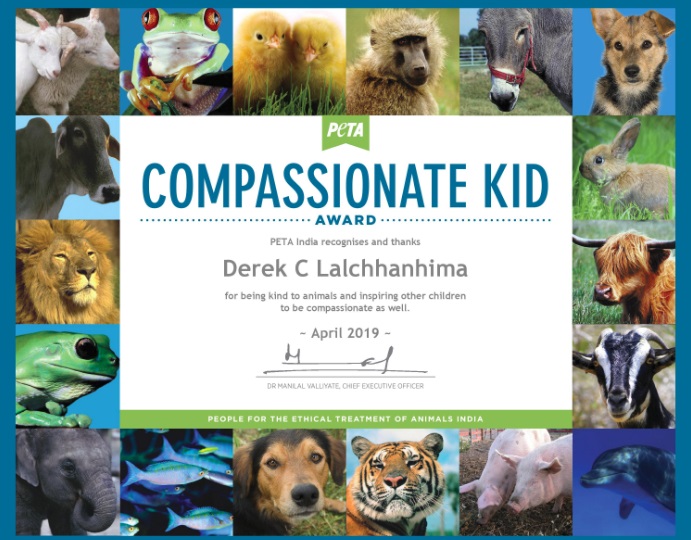 The story which was first posted on Facebook broke through the Internet and media houses across the nation.

The boy, also, later on received an appreciation award by his school for his heartwarming and courageous act.

In a later post on Facebook, the boy is seen holding the appreciation award and wrapped in a traditional shawl of Mizoram which stands as an honour for exhibiting extraordinary courage.

PETA India’s Compassionate Citizen programme which is designed to foster compassion in children has rightly recognised Derek’s act which epitomises their vision of compassion for all beings.