Not only letters, India Post ferries IMFL as well to dry Mizoram

The excise sleuths of Assam recovered a mail van of the Postal department, which was used as a prime mean to paddle the IMFL illegally 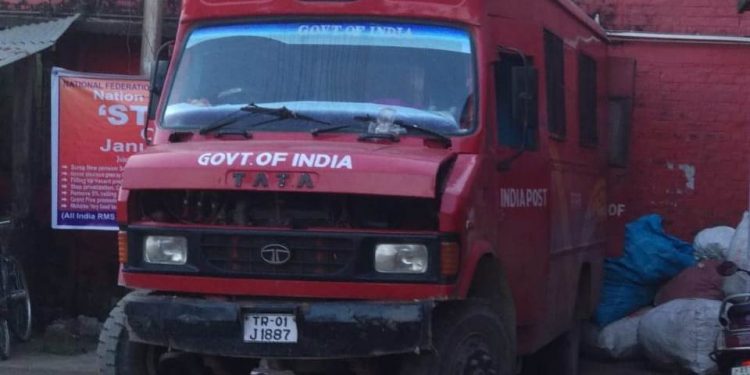 The mail van of the Indian Postal department.

Law enforcers are working hard to reduce the crime rate. So does the criminals to give a slip to the cops.

A classic example of the same came to the fore when excise sleuths caught the ubiquitous red vans of India Post department to ferry Indian Made Foreign Liquors (IMFL) to dry Mizoram. The incident took place at south Assam’s Silchar, officials said.

Based on specific inputs of the Excise Intelligence Bureau, the excise sleuths of Assam  recovered a mail van of the Indian Postal Department (bearing number TR-01 J 1889) registered with Tripura state transport which was used as a prime mean to paddle the IMFL illegally.

Assam excise minister Parimal Suklabaidya appreciated the operational team which carried out the raid and brought into light this treacherous act of crime of using postal vans for such purposes.

“We have already ordered a high level enquiry into this. The culprits will be brought to book soon,” he said.

Mizo National Front (MNF) government that came to power in Mizoram in December 2018, banned the sale and consumption of liquor in the state.

Mizoram has been a dry state from 1997. It is only in 2015 that the then Congress government lifted the ban on liquor. Following the lifting of the ban, liquor shops thrived in the Christian majority state.

The Congress justified that the lifting of the ban has generated revenue for the state and reduced the spurious liquor related deaths and accidents.