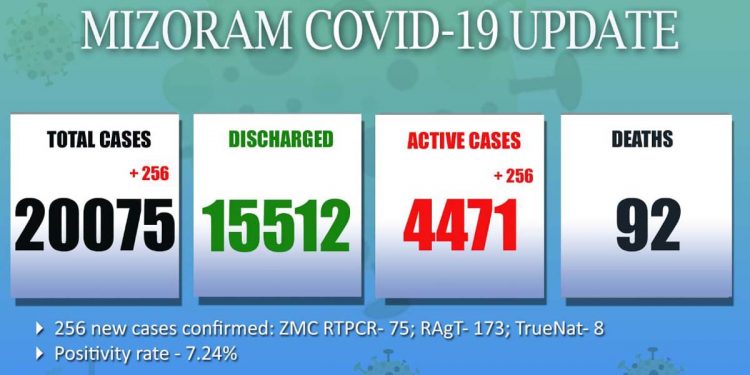 Mizoram’s Covid19 count crossed a 20,000 mark on Wednesday as 256 more people tested positive for the infections, a health official said.

The new Covid19 cases were reported from various districts with Aizawl reported the highest at 154, followed by Kolasib and Lawngtlai, which reported 50 and 17 cases respectively, he said.

A total of 68 children and 4 inmates of an orphanage and rehabilitation centre in Kolasib district were among the newly-infected people.

A total of 22 patients have travel history and the rest 234 were locally infected.

A total of 117 patients have developed symptoms of Covid19 and 139 are asymptomatic, the official said.

Mizoram now has 4,471 Covid19 active cases while 15,512 people have recovered from the infection.

The Covid19 death toll in the state stands at 92.

The state has so far tested over 4.85 lakh samples for Covid19.

According to state immunisation officer Dr. Lalzawmi, more than 5 lakh people have been vaccinated till Tuesday.