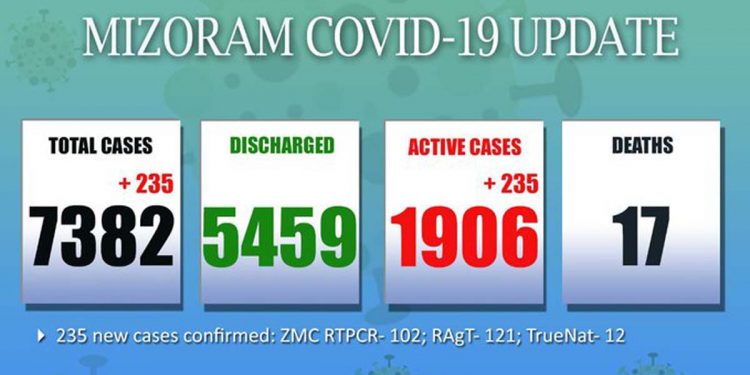 Mizoram’s Covid19 positive tally reached 7,382 on Saturday as 235 people, including 47 policemen, who returned from West Bengal after election duty, tested positive for the infection, an official said.

The policemen initially tested negative for Covid19 and have been placed under quarantine since their arrival in the state in the last week of April, he said.

About 32 children and a healthcare worker have also tested positive for Covid19.

A total of 102 cases were confirmed at Zoram Medical College’s RT-PCR laboratory in Aizawl, 12 at TrueNat facilities from two districts and 121 cases were detected during Rapid Antigen Test in various districts, the official said.

Of the 235 cases, Aizawl reported the highest cases at 117, followed by Serchhip district, which reported 59 cases.

A total of 76 patients have travel history and the rest 159 were found to have locally contracted the infection, the official said.

Mizoram now has 1,906 active cases, while 5,459 people have recovered from the infection.

A total of 108 people recovered on Friday.

The Covid19 death toll in the state stands at 17.

According to state immunization officer Dr. Lalzawmi, a total of 2,25,387 people have been administered the first dose of Covid19 vaccine and 47,778 of them have received both doses of the vaccine till Friday.