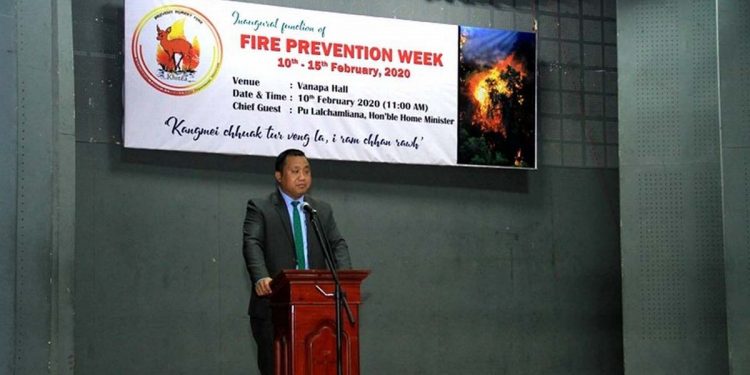 The officials of the state fire and emergency department said from 2015 to 2019, a total of 31 people were injured in various fire incidents.

On Monday, Mizoram began observing fire prevention week to spread awareness about the hazardous effects and environmental damage caused by both house and forest fires.

Mizoram home minister Lalchamliana inaugurated the week at an event held at Vanapa hall in Aizawl.

The observance of the fire prevention week will continue till Saturday with the theme “Kangmei chhuak tur veng la, i ram chhan rawh” (Prevent fire and protect your land).

Speaking on the occasion, the Mizoram home minister said majority of house and forest fires were human-made occurred due to recklessness.

He said forest fires could cause colossal damages as it affects not only the human beings but also the wildlife, climate, and environment.

The home minister informed that the government would set up a few more fire stations to prevent fire incidents and facilitate rapid response during an emergency.

He said at present there are 14 fire stations in 8 districts of Mizoram.

“The government has been making massive effort to set up more fire stations in the newly created three districts- Saitual, Hnahthial and Khawzawl for emergency response,” he said.

He added that the government also launched helpline No 101 for fire incidents.

Meghalaya environment, forests and climate change minister TJ Lalnuntluanga said the government would make massive efforts to protect forest and wildlife as per the existing laws.

He also harped on the need to educate people about fire prevention for better environment.

Meanwhile, the state government has fixed March 15 as the deadline for jhum burning and asked all farmers to burn their farms or jhums within the deadline to avoid environmental damage.