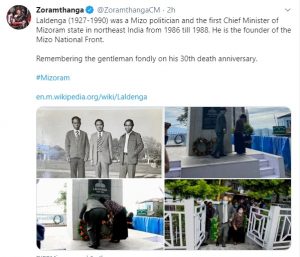 ‘Laldenga (1927-1990) was a Mizo politician and the first Chief Minister of Mizoram state in northeast India from 1986 till 1988. He is the founder of the Mizo National Front.

Remembering the gentleman fondly on his 30th death anniversary.’

Originally a Havildar in the Indian Army, Laldenga later worked as an accounts clerk in the Government of Assam.

Disappointed by the Government’s indifference to the severe famine in the Mizo district in the late 1950s, he rebelled against the Government.

As a leader of the MNF, he led a secessionist war seeking Mizo territory’s independence from India.

He was captured many times and spent most of his time in exile in Bangladesh.

The guerrilla movement lasted for 16 years till the Mizo Accord was signed in 1986, by which he became the chief minister.

He won the first Mizoram Legislative Assembly election under statehood in 1987, and continued at the chief minister’s office for another year.